Things to Do on The Wild West Coast of Tasmania

There’s really no part of Tasmania where you won’t find somewhere interesting to visit. But some parts of the state are easier to reach than others, making them more popular with tourists. I think it’s fair to say that the west coast of Tasmania is far less travelled than the south, east or north coasts. It still gets visitors, often people on a a Tasmania road trip or tour of Tasmania, but just not as many.

Part of the problem, is that there’s only so much of the Tasmanian west coast that you can reach. Once you hit the Franklin-Gordon Wild Rivers National Park much of the coast is wild and inaccessible. Yes, there’s Mount Field and Strathgordon closer to Hobart, but those places are very isolated and nowhere near the coast. So you need to look further north along the coast for places to visit, which is where these great destinations on the west coast of Tasmania come in. 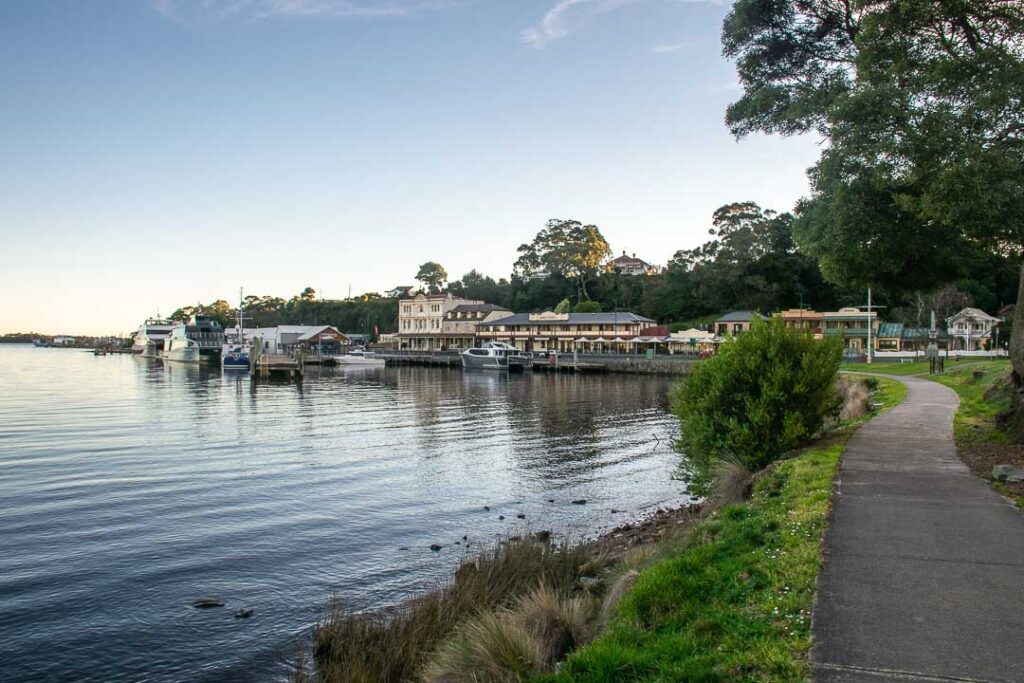 During my trip to the west coast of Tasmania, Strahan was basically my base for exploring. Strahan may be a small town, but it seems to be the region’s most popular base for tourists. The town rests at the northern end of Macquarie Harbour and has a sleepy, seaside feel to it. You really should have no trouble getting into holiday mode here.

Most of my time in Strahan related to sleeping, eating and relaxing. But when I did have some spare time it was really nice to follow the path along the waterfront and enjoy the view.

However, there was one notable activity I missed which was the Strahan West Coast Wilderness Railway. Many consider this heritage steam train to be the highlight of the region so I have to mention it. Realistically, I just didn’t have time for it, but it’s clearly a key attraction for the region.

Other common things to do in Strahan include the Morrisons Huon Pine Sawmill full of woodworking and The Ship That Never Was theatre production. 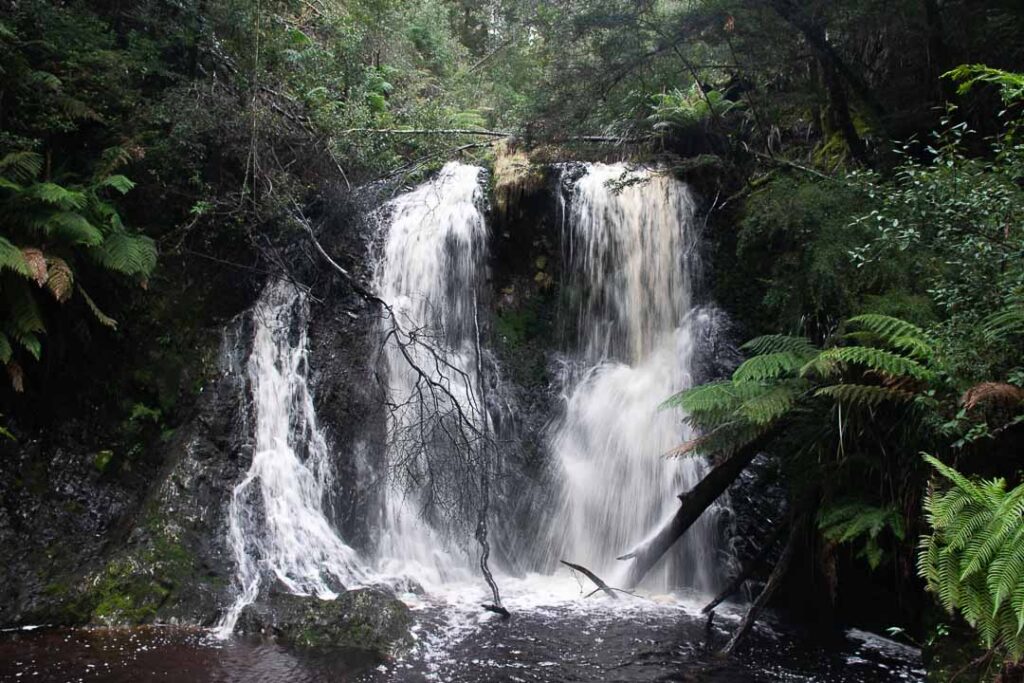 Waterfalls and Tasmania go hand in hand. And you really don’t have to go far in the state’s west to find one. In fact, there’s even one just a relatively short walk from the centre of Strahan. Hogarth Falls may be close to Strahan, but the trail you take to get there makes it feel like you’re off in the middle of nowhere.

The trail for the waterfall starts just over the road from the waterfront on the edge of Strahan. Getting to Hogarth Falls involves a nice nature walk that takes 15 to 20 minutes to reach the waterfall. At the end, there’s a short and steep path down to the bottom of the waterfall.

Now, Hogarth Falls certainly aren’t as massive as some waterfalls in Tasmania, but they’re nice to visit nonetheless. Despite their size, the spray was quite intense and made getting a shot much harder. 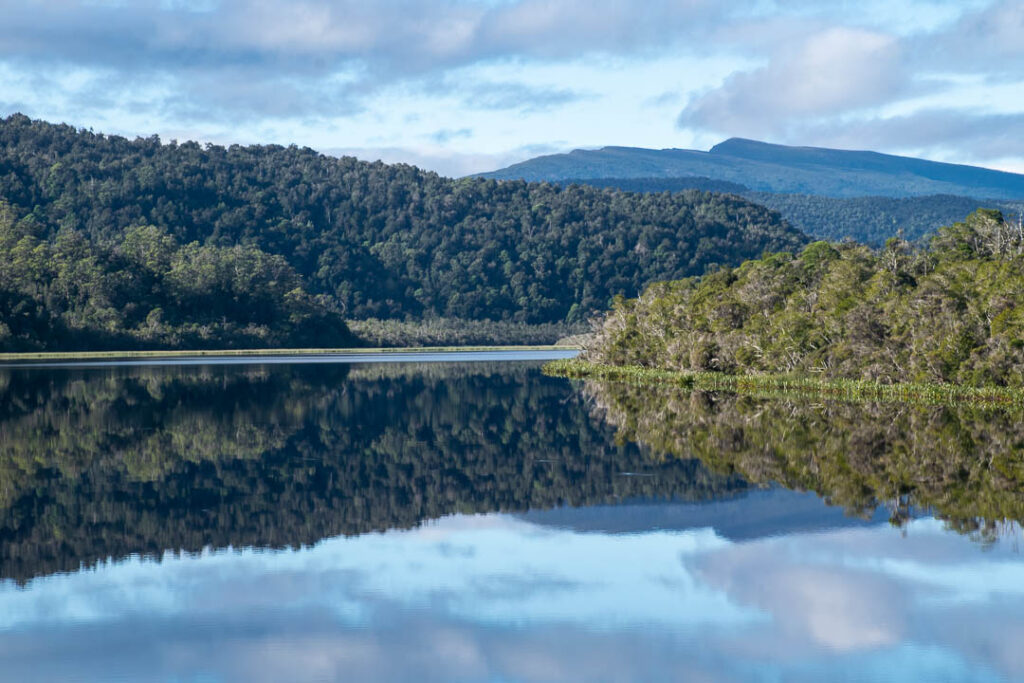 The best way to experience the sheer remoteness and tranquillity of western Tasmania is with a Macquarie Harbour cruise. Sailing out of Strahan, this cruise takes you part of the island inaccessible by any other way. Sightseeing around the mouth of the harbour at Macquarie Heads is nice, but things get more impressive the deeper in you go.

Cruises in the harbour generally also venture onto the Gordon River and that’s where you say goodbye to the world. There you’ll drifting deeper into the Franklin-Gordon Wild Rivers National Park, with the occasional jetty the only sign of humanity. Plus there are the epic reflections of the surrounding forest and mountains on the undisturbed water that give the place a surreal quality.

But it’s not all natural attractions here either. Visit Sarah Island in the harbour and you’ll get to explore one of the worst penal stations Australia ever had. The history there is full of murder, corruption, escape attempts, and even cannibalism. It’s a dark history but undeniably fascinating. 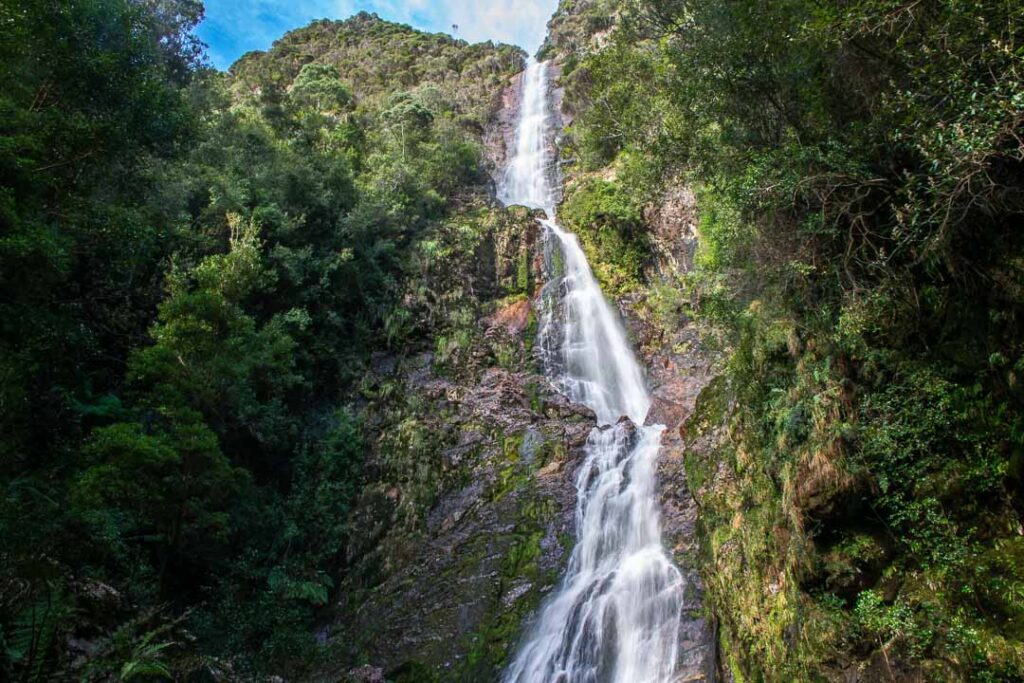 While it’s a little removed from the other places on this list, Montezuma Falls is definitely a place not to miss. The waterfalls, one of the highest waterfalls in Tasmania, is just as close to Cradle Mountain as it is to the coastline. But it really represents the combination of nature and industrial history that defines western Tasmania.

To reach Montezuma Falls, visitors hike a gentle trail through the forest along an abandoned tramway for the region’s mines. It’s a great walk if you just want to get lost in Tasmanian wilderness. And at the end of it all you’re presented with a towering 104-metre-high waterfall whose top you can’t really see.

If you want to see a spectacular waterfall in Tasmania, this one may require a little effort, but it’s worth it. 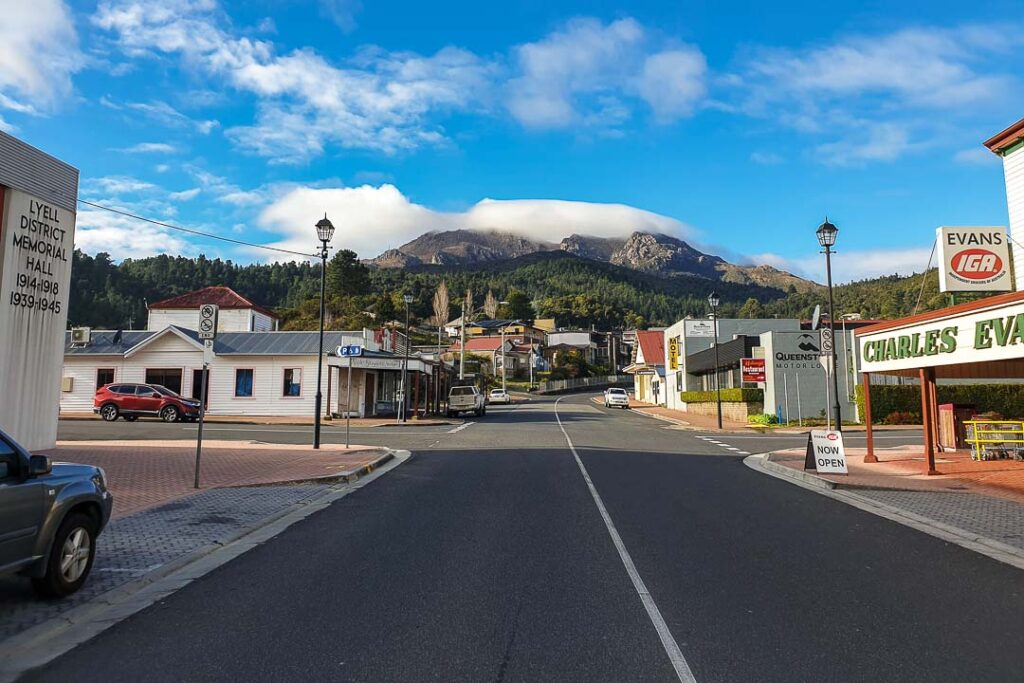 Queenstown is the main town of the West Coast. But it’s still really quite a small town all things considered. Much like many places in the west, Queenstown is a former mining town and you’ll probably be able to tell that quite quickly. One look at the stark hillside to the town’s east kind of tells that story. But more on that later.

As for the town itself, Queenstown very much has the look of a country town. A walk down the main road is definitely in order, especially with the looming figure of Mount Owen nearby. But the obvious main attraction in town is it’s railway station. Queenstown is the other end of the West Coast Wilderness Railway from Strahan, but it has a much larger and more noteworthy station than Strahan.

What I really find interesting about this connection between Queenstown and Strahan is that both towns almost faded into obscurity. I won’t cover the entire history, but it revolves around two feuding mining companies in the region with their own towns and ports. The company that prevailed used these towns, while the other used settlements that now mostly lie abandoned. 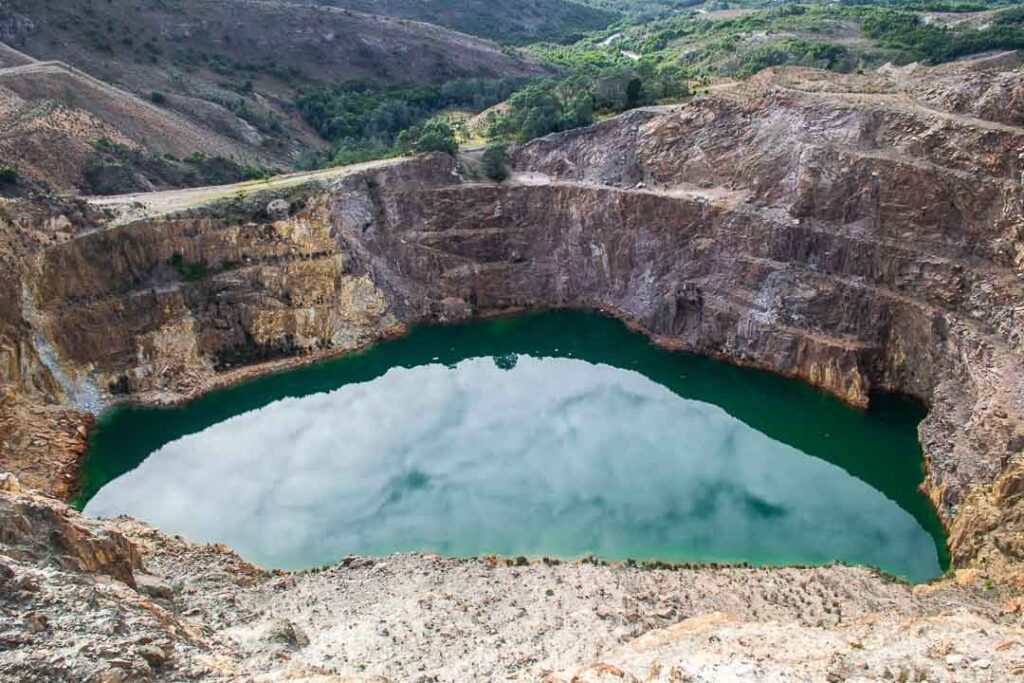 The area around Queenstown is really unusual for Tasmania as it swaps forest for barren landscapes. This is a result of the region’s mining history and it’s best seen at Iron Blow Lookout. Found up in the hills above Queenstown with viewpoints and hiking trails to explore, this place is a testament to the harm done by copper mining and hopes for rehabilitation.

The lookout stands over a huge flooded quarry, the rocky hillside stained in a sickly yellow colour. Then there’s the colour of the water in the manmade lake that should scare off any would-be swimmers. What’s crazy is that this is the landscape after decades of healing!

Apparently the area was even worse in the early 20th century. The area was covered in a putrid yellow fog of sulphur dioxide that poisoned the air. Yes, this is on the same island reported to have some of the cleanest air in the world. They say it will still take several generations for trees to regrow in some parts. 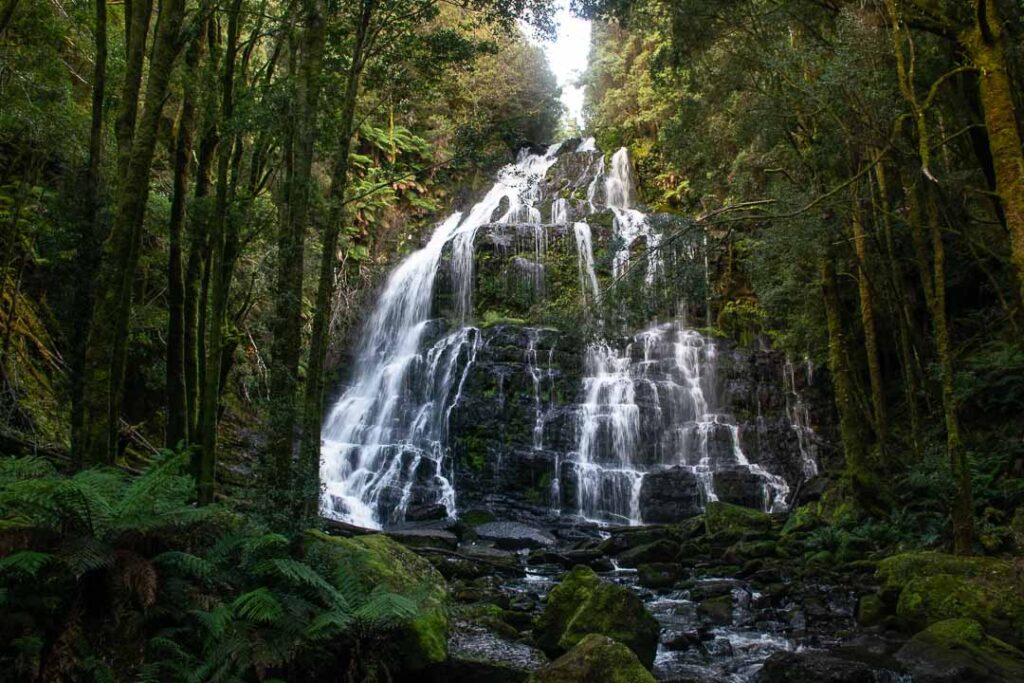 Ok, one last waterfall to wrap this up and it really is a stunning one. Nelson Falls is another gorgeous waterfall you can visit between the west coast and the Highlands and it may just be my favourite waterfall of them all. Because it’s found off a short walk from the road between Queenstown and Lake St Clair, there’s no reason not to stop here if you’re in the area.

Nelson Falls is actually listed as one of Tasmania’s 60 Great Short Walks, but that mostly has to do with the waterfall you get to see at the end. Rather than a plunging waterfall, Nelson Falls are more of a cascading waterfall that flows over a series of rocky ledges. What’s so magical about this waterfall is the way it emerges from the rainforest. It honestly almost has a sacred feeling to it, as if it is the centrepiece of this wilderness.

Tips for Visiting the West Coast of Tasmania

Since finding places to visit on the west coast isn’t that hard, let’s look at other things worth knowing. Accommodation is pretty straightforward in these parts because of how remote it is. The choice is between staying in Strahan or Queenstown, but there are so many places to stay in Strahan that it just makes sense.

Getting there is the bigger challenge, as it’s as far as you can get from Hobart and Launceston. Most people will choose to drive themselves there from either city as they explore the island. But there is this 5-day tour of Tasmania that stops here and gives you a day to go sightseeing. The tour actually has the option for you to visit the Henty Dunes, another regional attraction I missed.

If you are driving yourself, a word of warning. There’s only one road between Queenstown and the Central Highlands and basically no civilization on that route. This also means there’s no petrol stations on that route, so fill up beforehand when you travel from Strahan to Queenstown.

Have you travelled to the west coast of Tasmania? Where else would you suggest people go and what else is there to do? Please share your thoughts in the comments below.