There was a real theme to my last trip to Spain, way back in 2019. My destinations weren’t connected by region or history, but instead by a coastline. Without meaning to I’d arranged for most of my travels there to follow Spain’s east coast. What’s interesting is that even at my last stop in the city of Alicante, I’d not grown tired of the seaside views.

Those very views are probably what draw a lot of people to plan an Alicante holiday. Much like other beach destinations along the Costa Blanca such as Altea and Benidorm, Alicante is popular predominantly among Brits seeking sea and sun. What’s great is that even visiting in December, there were only the faintest signs that winter was approaching. The time of year did mean I wasn’t there for Alicante’s beaches, so I filled my brief time there with a few of the more popular places to visit in Alicante. 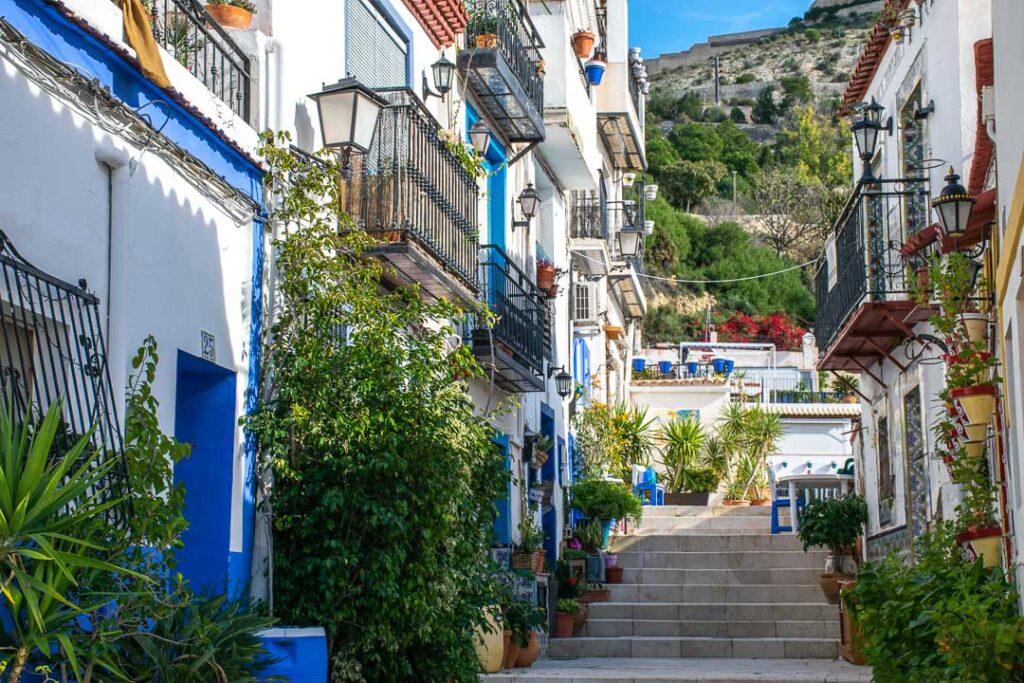 In terms of colour and charm, the historical neighbourhood of Barrio Santa Cruz is a must see in Alicante. Sitting to the east of the city centre against the steep hillside slopes of the Parc de l’Ereta, it’s basically the Old Town of Alicante.

Only, a very small part of Barrio Santa Cruz looks like these photos. That’s not to say the rest of the neighbourhood lacks appeal, but these picture postcard lanes really only make a small part of it. To find these gorgeous streets and staircases, head to the northern part of the Old Quarter up from Plaza del Carmen.

The area also features several nice viewing terraces if you want some city views without climbing up to the next Alicante highlight. One downside to exploring the area solo is that I never learned much about Barrio Santa Cruz’s history, which seems a shame. That problem is easily fixed by taking a walking tour through the area. 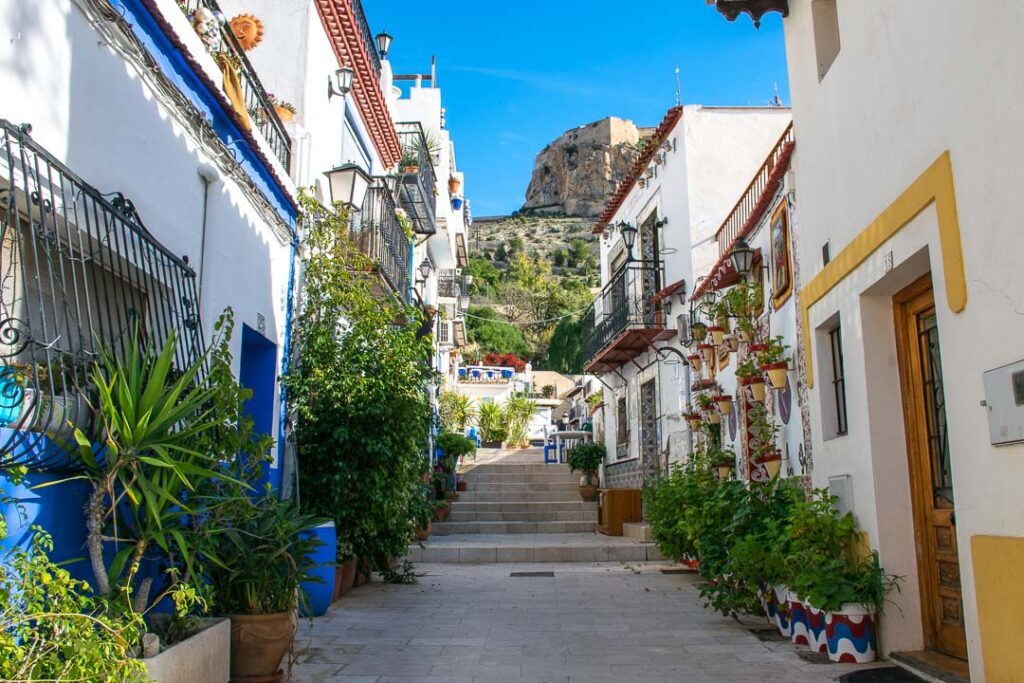 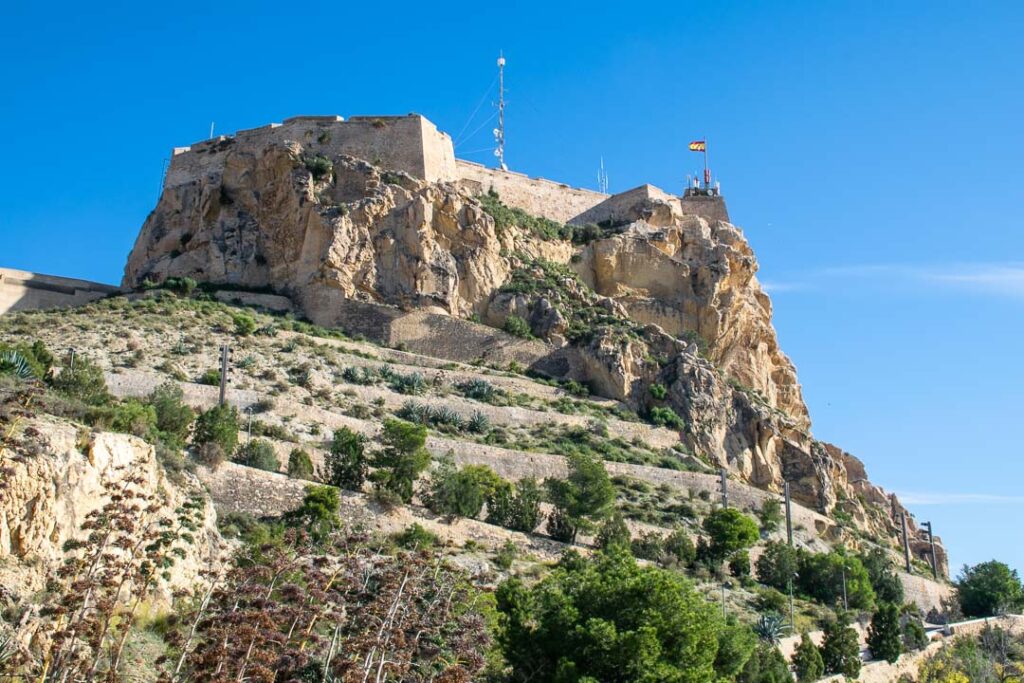 If you’d been wondering what to do in Alicante before arriving, it won’t take long to see one answer once you’re there. Towering over much of the city is Santa Bárbara Castle, a monumental fortress atop Mount Benacantil just outside the city centre.

Visiting this castle built by the Moors in the 9th century is obviously one of the most popular things to do in Alicante among holidaymakers. Within the fortress walls you can see the remains of buildings and churches, as well as exhibits inside a small museum. And there are the various levels of its fortifications, each with a different view out over Alicante and the surrounding coast.

Seeing the castle way up the top of a mountain begs the question; how do you get up there? I opted for the hardest choice, walking up, but I recommend doing it if you can as there’s plenty to see along the way. Otherwise, you can always take the special lift or a bus to save yourself the energy. 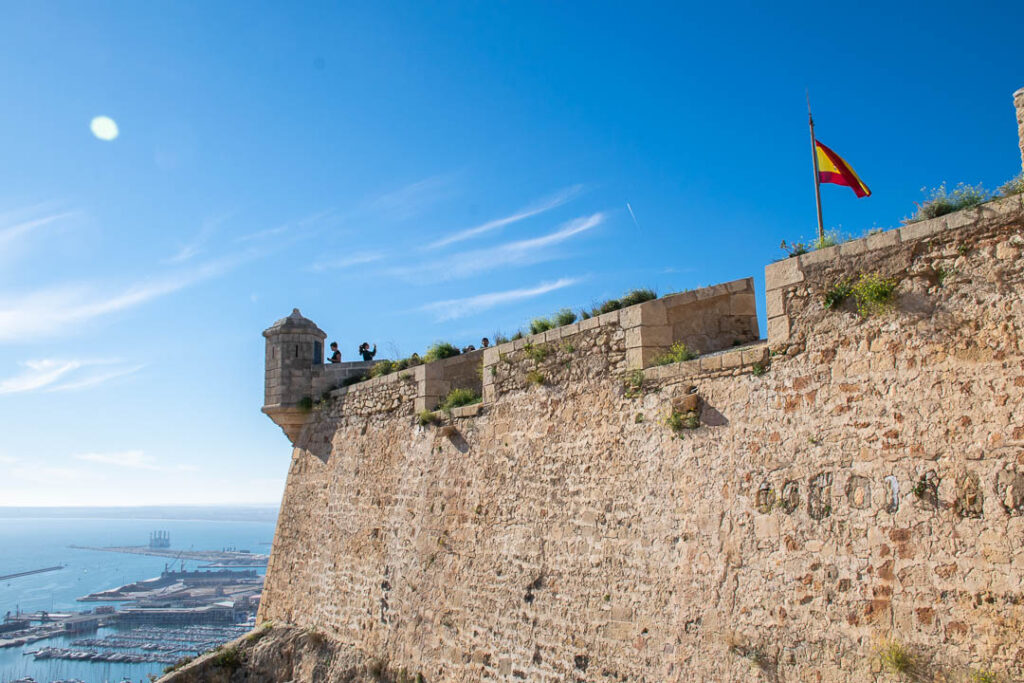 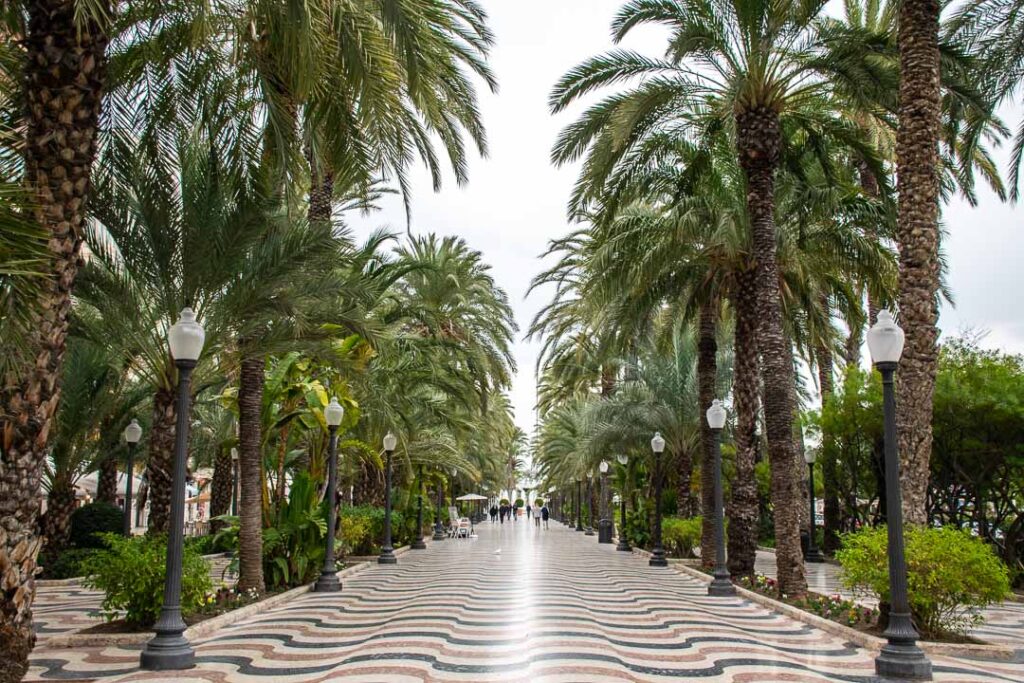 Unlike Valencia where the beach is miles from the city centre, Alicante’s waterfront sits right off the city centre. Following the waterfront along the city’s marina is the palm-lined Esplanada d’Espanya. It’s a nice little promenade decked out with mosaic tiles, bordered by outdoor seating for cafes and gelaterias.

Further up from the Esplanada d’Espanya lies Alicante’s beach, the Playa del Postiguet. It sits directly beneath Santa Bárbara Castle, and while it isn’t huge, it’s definitely big enough for visitors on holiday in Alicante seeking sand beneath their feet. The Playa del Postiguet is the first of many beaches you’ll find if you continue north along the coast to Cap de l’Horta and beyond. 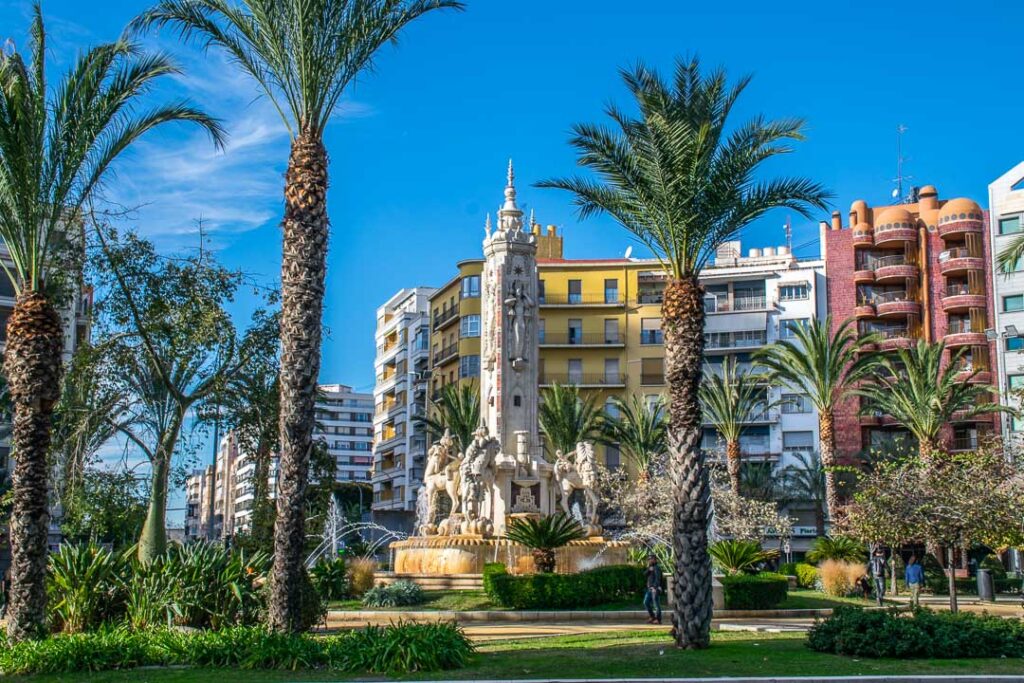 It may seem like a broad suggestion for sightseeing in Alicante, but I really liked just wandering around the city centre of Alicante. The modern parts of some European cities can be quite unremarkable, but I liked Alicante for some reason.

Spots like the Plaza de los Luceros with its fountain and palm trees seen above help with that I think. Parque Portal de Elche is another green space that catches your eye, looking like it belongs more in Australia than Spain. Then there’s the city’s Mercat Central that lives up to the high standard of Spanish markets.

The other benefit of making time to see the city centre is its overwhelming range of places to eat and drink. For an easy route past lots of options, I’d suggest walking down the pedestrian street Calle Periodista Pirula Arderius to start. Of course, a tour is another great way to explore the city’s food scene. 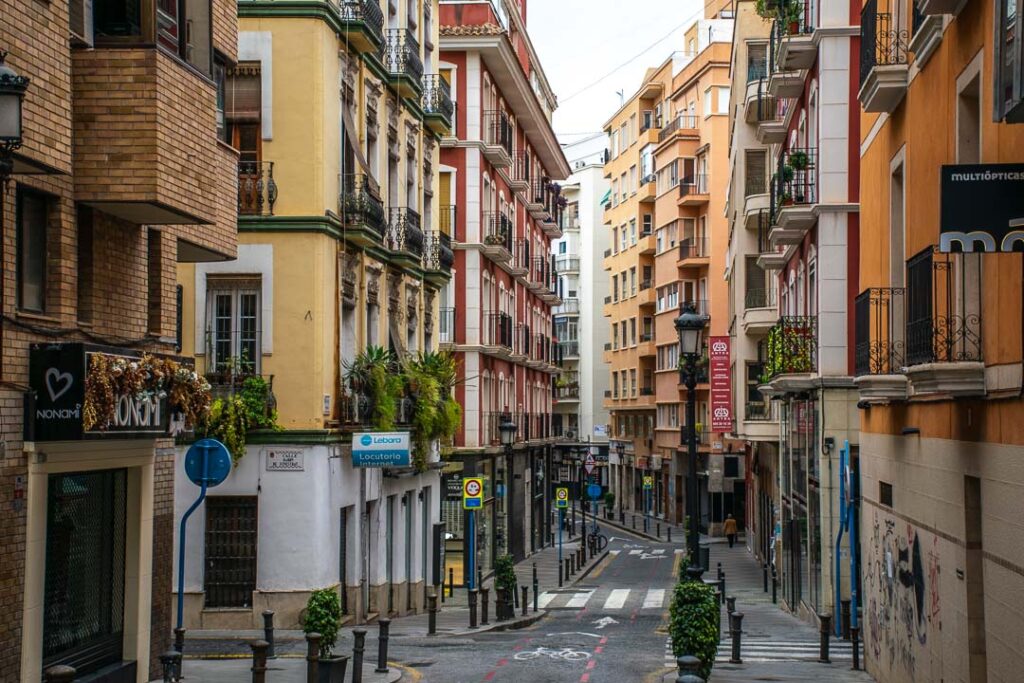 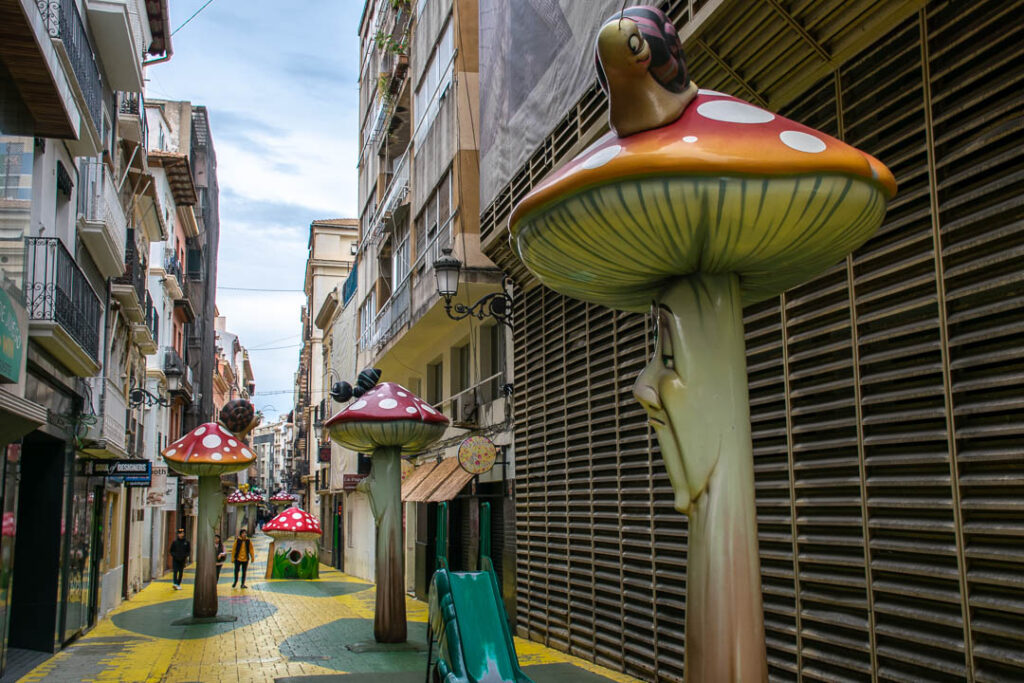 One final quirky place that tourists might want to see is El Carrer dels Bolets or “Mushroom Street”. With a name like that, you might think that this is where all of Alicante’s mushroom vendors are based. But no, it’s weirder than that. This inner city street received a fantastical face lift with a series of cartoonish mushroom statues planted along it.

Travel Tips for an Alicante Holiday 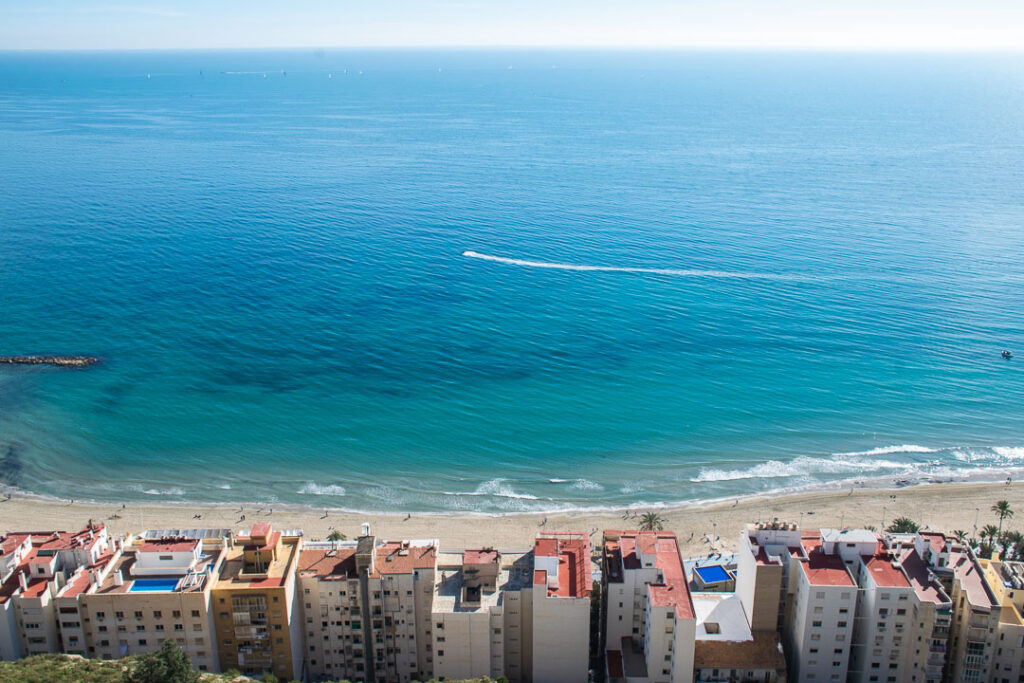 Obviously, the above isn’t an exhaustive list of everything Alicante has to offer. That said, you can easily fill a day or more just visiting these places. Other Alicante attractions to look at include Castell de Sant Ferran, MACA Contemporary Art Museum of Alicante, and the Basilica of St Mary of Alicante.

But you should have a better idea of what to do in Alicante now, so let’s move on to a few Alicante tips to help with your visit.

Firstly, Alicante is an extremely useful entry point and base to explore this part of Spain. You can fly into its airport, get a bus into the city and then continue through to Benidorm, Murcia, Cartagena, etc. If you’re traveling from closer places in Spain, train and bus options are easy to come by. For instance, it’s less than two hours by train from Valencia to Alicante. There’s even a special tram/light rail hybrid that connects Alicante with Benidorm, Altea, and Denia.

Then there’s where to stay. I stayed in an Airbnb private room just north of the train station in a fairly unremarkable residential area. You won’t have any problem finding hotels, guesthouses and apartments in Alicante, just be prepared to pay a little more to stay in the city centre. Perhaps try the Mercado area if you’re after somewhere more affordable.

If you’ve had the chance to travel to Alicante on holiday before, what would you recommend other visitors do? What did you like or not like about the city? Please share your thoughts in the comments below.