Growing up in Melbourne there were a few places my family would go on holidays in Victoria with some regularity. The surf coast was one, northern Victoria another. And then there was the Grampians. My memories from that time are spotty, but I do distinctly remember the bush there and how serene of a place it was.

Upon moving back to Melbourne, visiting the Grampians was high on my list of travel I wanted to do in my home state. But plans don’t always work out. Thankfully, my wish to do some Grampians hiking was revived thanks to Viator when they gifted me the opportunity to take one of their Grampians tours and return to this beautiful slice of country Victoria. Doing a tour like this from my home city was never something I’d really considered before, but as you’ll see, it turned out really well. 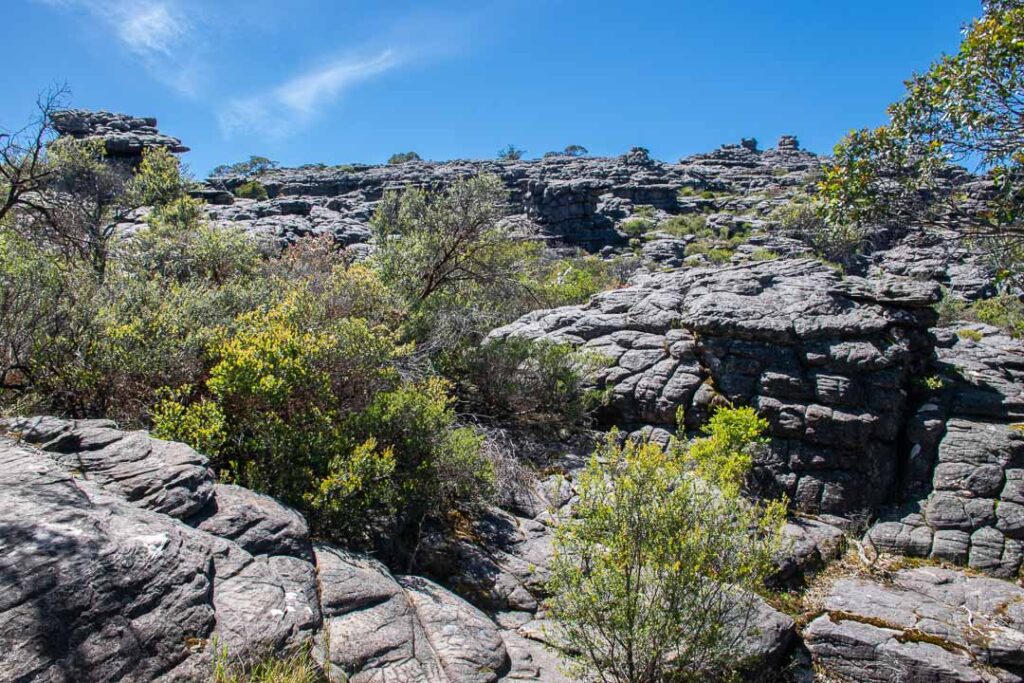 If you’re not from Victoria, there’s a fair chance that you might not know much or anything really about the Grampians. Found in western Victoria, the Grampians is a national park also known as Gariwerd by the traditional owners of this land. Mountain ranges and bush cover the Grampians, with only a few small settlements such as Halls Gap in the area.

If you want to make a Grampians getaway, you’ll first need to drive roughly three hours from Melbourne to get there. Once there you have your pick of activities, but most involve the outdoors in one form or another. Camping, mountain biking and rock climbing are popular things to do, but in the Grampians hiking is the big one. Travelers have their pick of walks and day hikes, but the big one is the 13-day Grampians Peaks Trail that runs a whopping 160km. 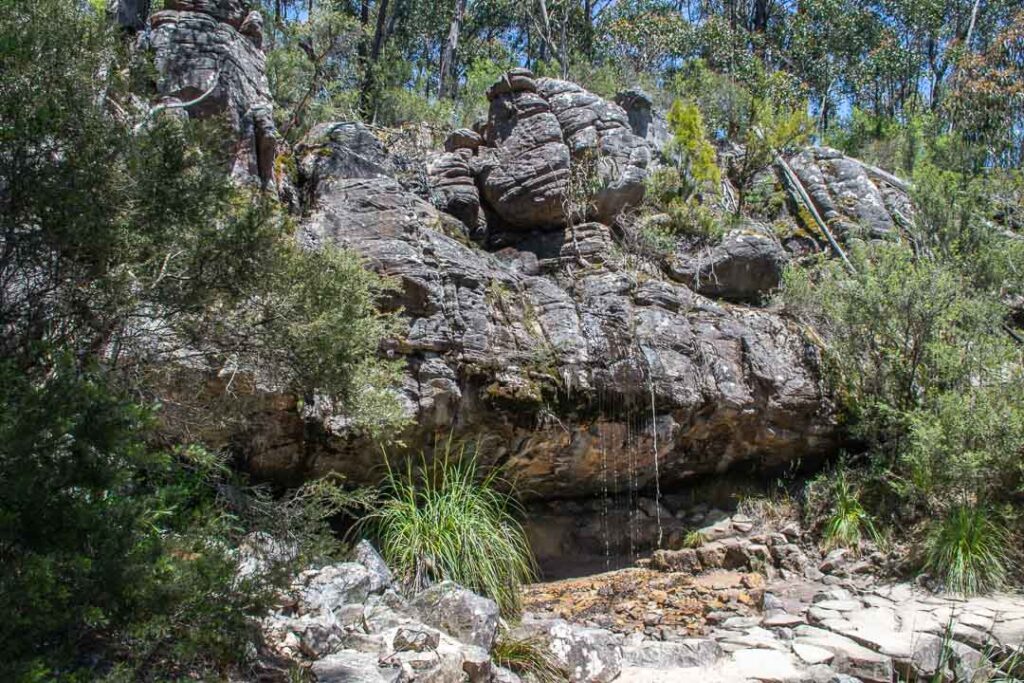 For anyone from Melbourne, the idea of doing a Grampians day trip may seem a little crazy. The Grampians are generally seen as more of a weekend or longer type of getaway destination; both because of how far away they are and how much there is to do there.

You’d also be surprised how easy it is to do. There are actually multiple Grampians tour from Melbourne that let you experience this place without having to worry about logistics. 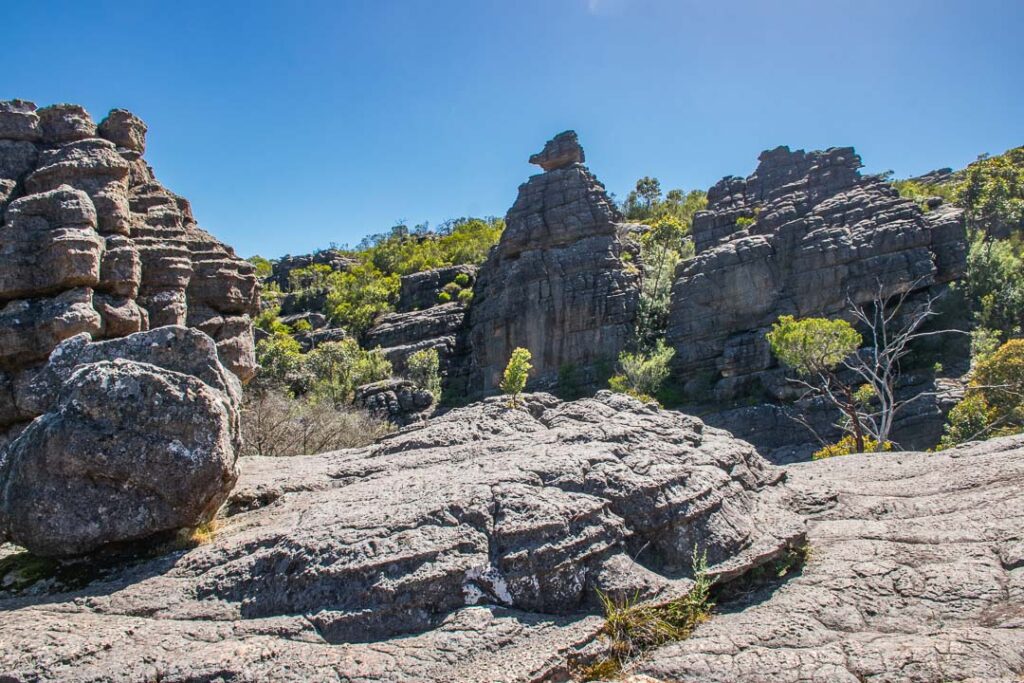 For my trip, I went with this Grampians hiking tour, as that was what most appealed to me about the destination. The tour included visiting three attractions in the national park area, two of which included walks/hikes. And I couldn’t have been more pleased with how it went, with a great guide and no feeling of ever being rushed.

While I was interested in hiking for my day tour, other tours focus on other aspects of the region. For instance, this tour combines some natural sights with more of a cultural approach to the Grampians. It also incudes a different viewpoint with a stop at the Balconies Lookout, so you’ll still get a chance to see the region’s exceptional scenery. 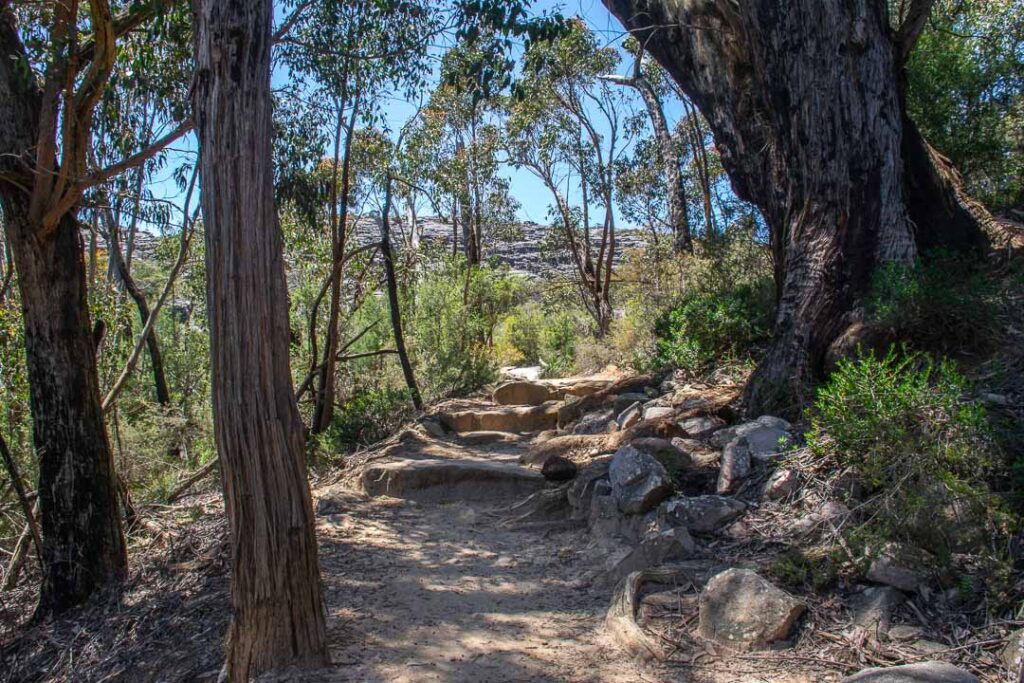 Upon arriving mid-morning, we started with the highlight of the tour – hiking with the Pinnacle in the Grampians. If you’re ever wondering what to do in the Grampians, this should be on your list.

This hike takes you from the Wonderland Carpark up along the Grand Canyon of the Grampians to the top of the Pinnacle Lookout. The return hike generally takes between 2 and 3 hours depending on your fitness level and covers 5.5km. Even taking my time and stopping to snap photos, it took me around 2.5 hours.

Much of the early climb up alternates between rocky incline and dusty steps. I personally love this kind of terrain, but some people were uncomfortable with the uneven terrain. The good news is that the track doesn’t require any rock scrambling or actual climbing, the worst spot being one short steep set of stairs.

Silent Street and the Pinnacle Lookout 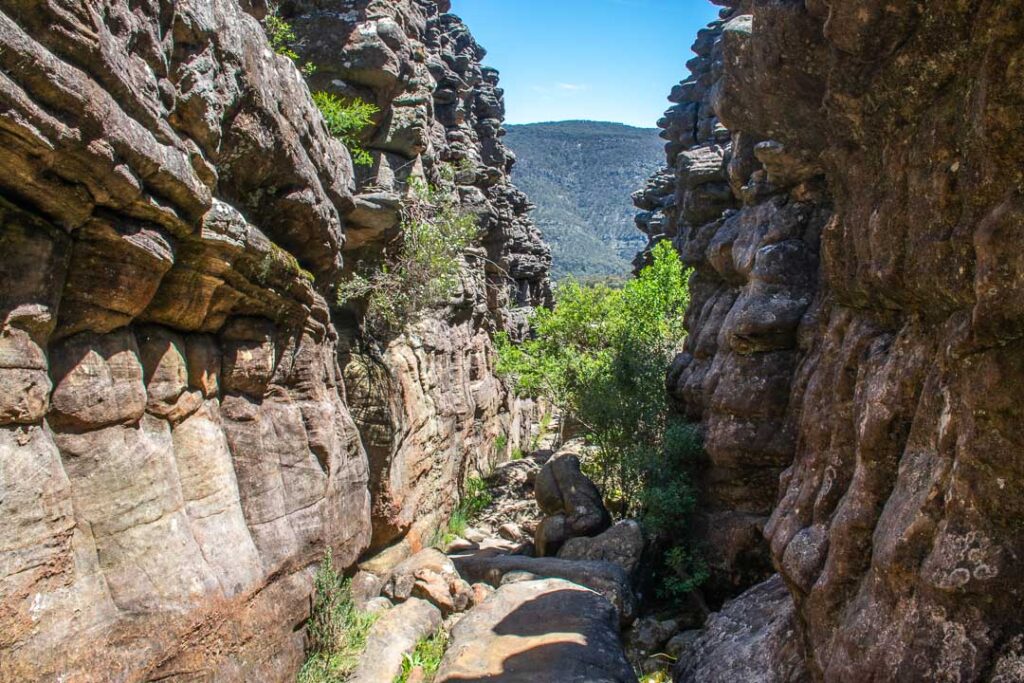 Along the trail there’s plenty of scenery to keep you entertained. Towering sediment cliffs showcase how the area’s terrain formed over time. There are also one or two viewpoints along the way to admire the rock formations of the Grand Canyon. At one point, you even pass the Bridal Veil Falls, although they were barely a trickle. That’s surprising given the state of the other Grampians waterfall I saw.

The most impressive part of the hike though is when you reach the Silent Street. A small, narrow gorge that you need to walk through, the Silent Street almost feels like it was deliberately forged by nature. The mostly natural path through the gorge lets you get up close with the site’s interesting rock formation, maybe a little close when you reach its narrow end. 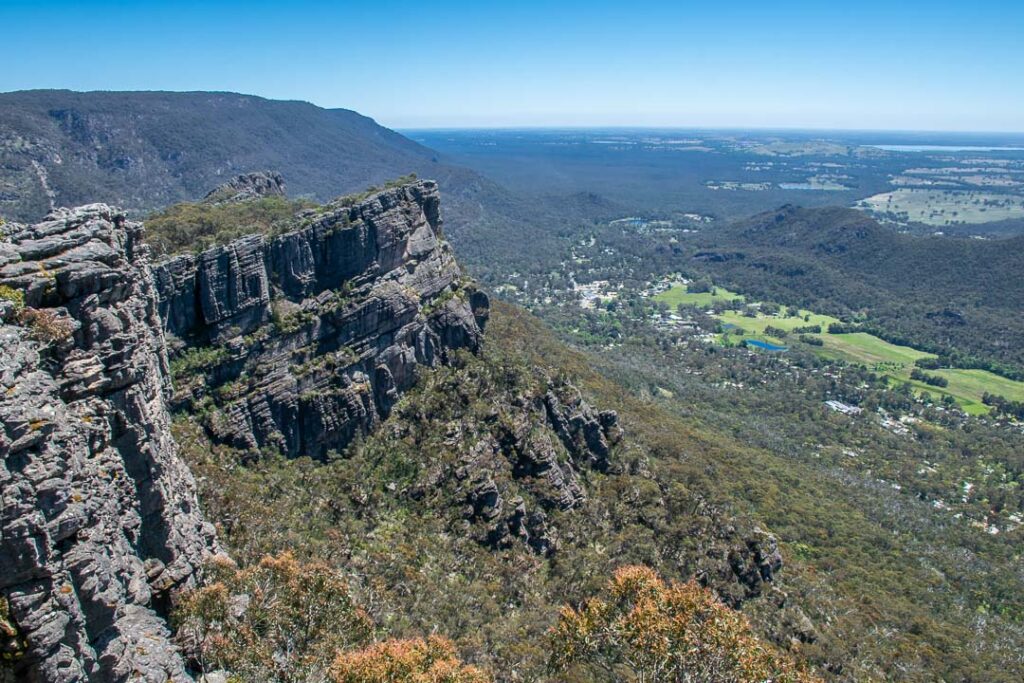 A bit further and you’ll reach the Pinnacle Lookout, the reason why you came here. The view from the top lets you see right over Halls Gap, the nearby mountains and Lake Bellfield. While you can enjoy the views from anywhere along the cliff edge, the actual lookout sits upon a narrow outcrop, fully surrounded by fences. All in all, this has to be one of the best Grampians walking destinations. 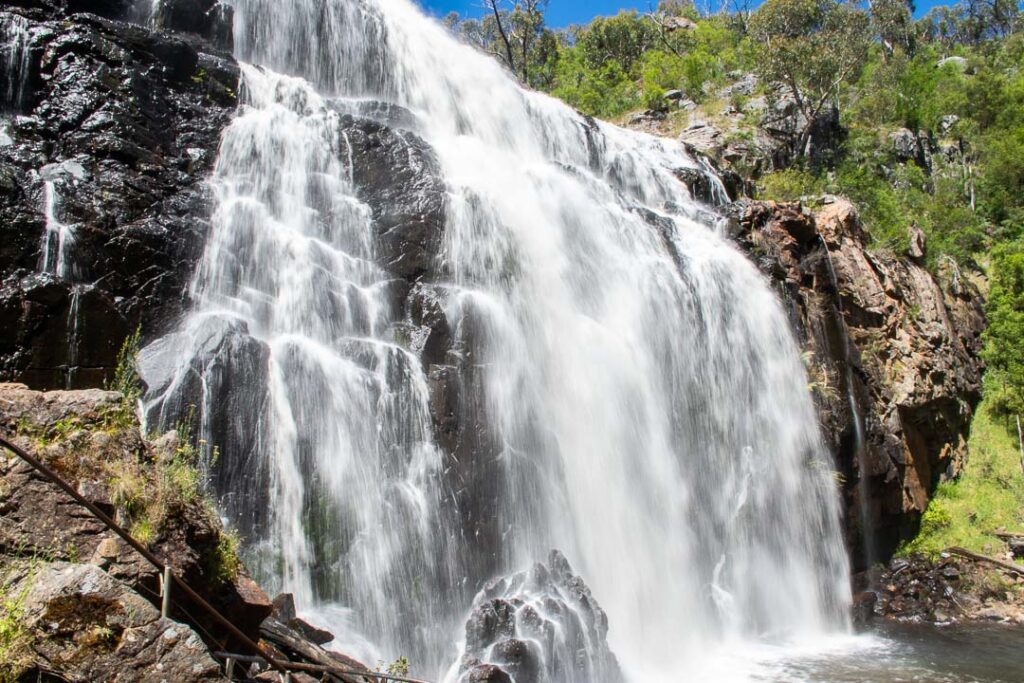 Following a well-deserved lunch, we continued our tour by heading back up into the hills to visit MacKenzie Falls. Of the many Grampians waterfalls available to visitors, there’s little doubt that this is the most popular. That’s because the MacKenzie Falls in the Grampians is one of the state’s largest waterfalls and seems to have a strong flow more often than not.

That said, we couldn’t have asked for a better time to visit the waterfall. The water was absolutely raging over the cascades thanks to unending rains of the last month. Maybe don’t expect it to look quite like the above when you go.

To reach the base of MacKenzie Falls, you need to take a trip down 260 “strenuous” steps and return back up them to leave. Honestly, I found these stairs harder than the earlier hike, but the effort is worth it for the view.

If you don’t feel like walking down all those stairs, there is a lookout as an alternative. The MacKenzie Falls Lookout is a short walk from the carpark and is wheelchair accessible-something the MacKenzie Falls Walk is not. There’s also an easy walk to Broken Falls nearby too, should you have the time. 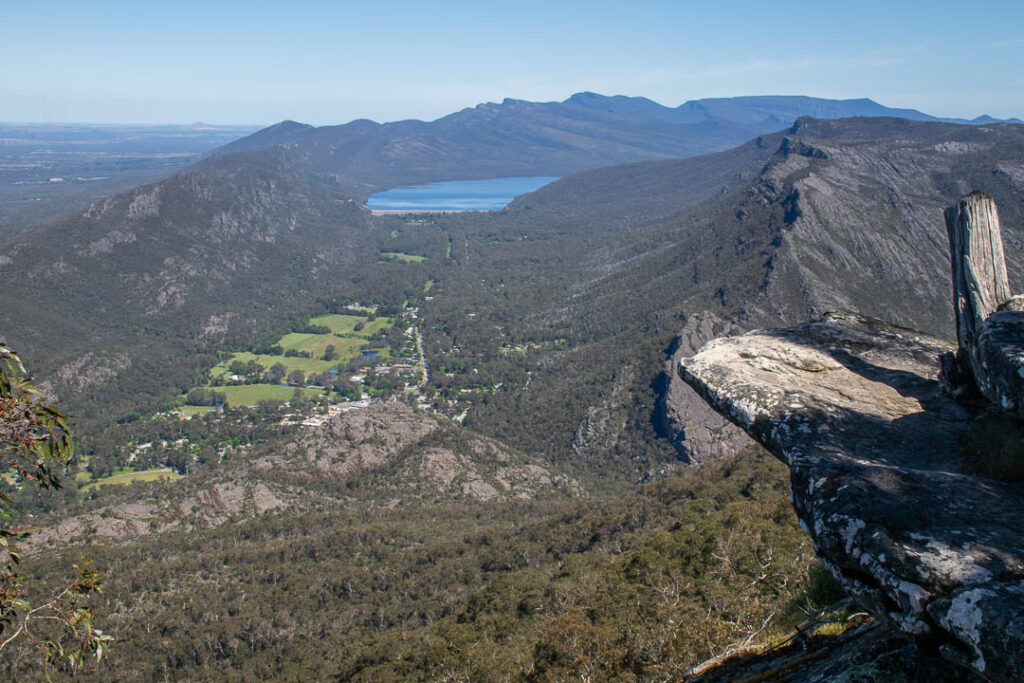 Following our waterfall visit, the next activity was clearly designed to be something gentler. Heading in a slightly different direction, we drove up to another Grampians Lookout, the Boroka Lookout.

This viewpoint of the Grampians has no hike required, meaning we could just relax as we took in the view. And honestly, I think Boroka Lookout may have the superior view to what we saw at the Pinnacle Lookout. But you do see much of the same things in the area, from Halls Gap to Lake Bellfield.

What is nice though is that you can see the Pinnacle Lookout in the distance from Boroka Lookout. Seeing where we hiked earlier in the day really puts that effort into perspective. The position of this viewpoint also emphasises the valley that Halls Gap sits in. 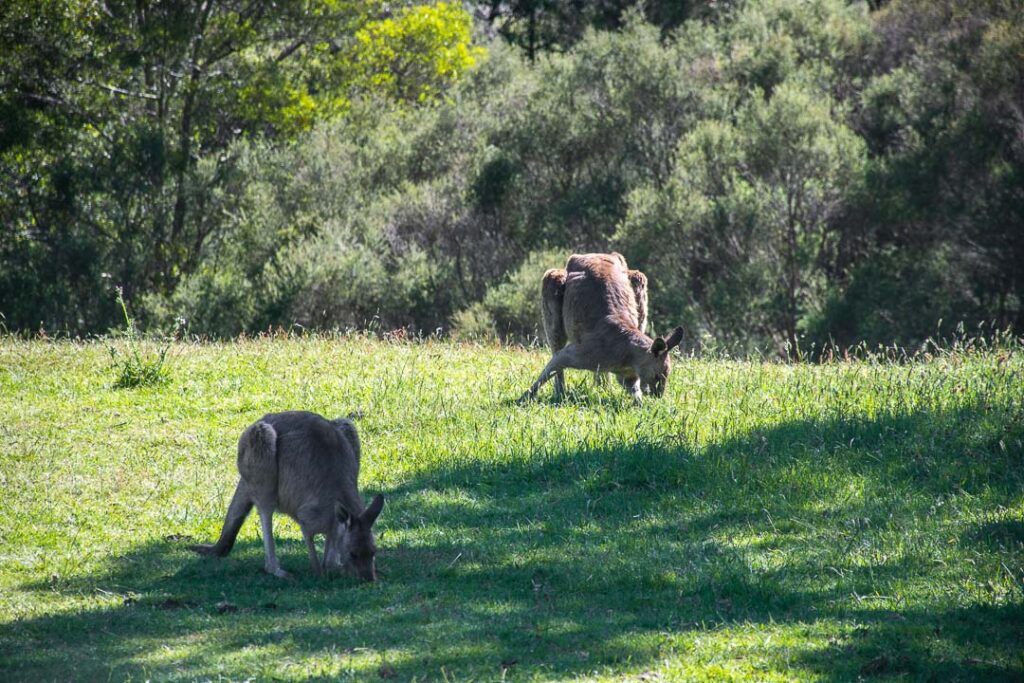 To finish our Grampians tour, our guide pulled over by a field near Brambuk: the National Park & Cultural Centre. This stop is clearly meant for foreign visitors, as it’s all about showing them local wildlife. As there were plenty of kangaroos and emus clinging to the shaded areas when we arrived, it seems to be a reliable location as well.

The animals seem used to the visitors too, allowing people to get a respectful distance before moving away. Walking around the field, we were able to see several really large Eastern grey kangaroos among the mob. For me though, what was novel was the number of emus around, as I’m personally less used to seeing them in such a casual way. Elsewhere in the area you may come across wallabies, however they tend to be more elusive. 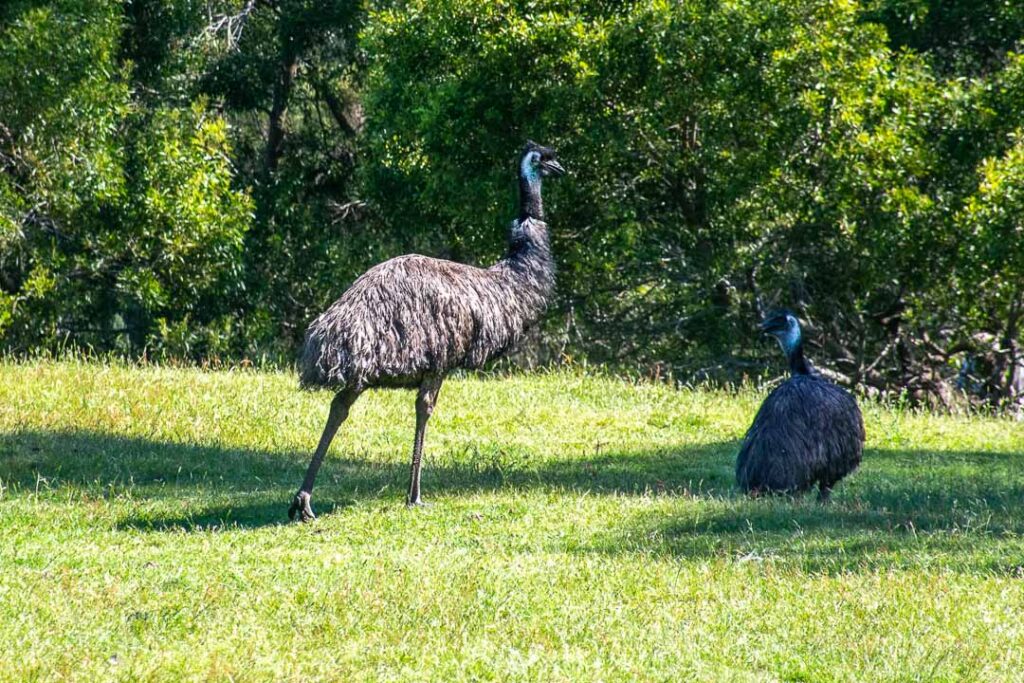 Travel Tips for Visiting the Grampians 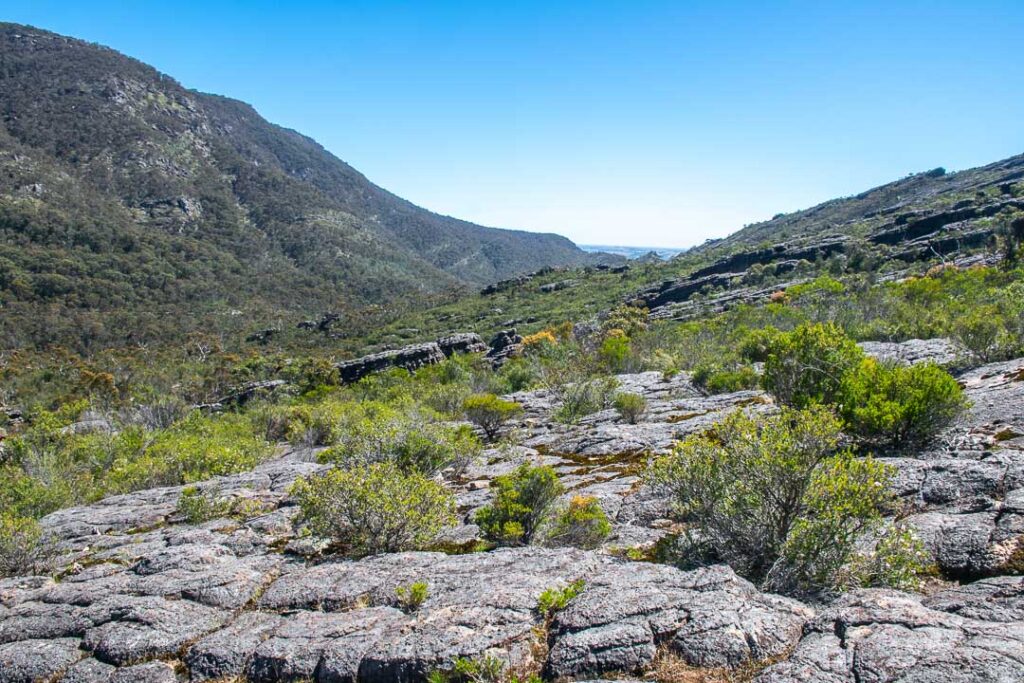 Now that you have a solid idea of what a day in the Grampians can look like, a few bits of advice.

When doing a day trip, whether on a tour or on your own, an early start is imperative. It’s going to be a reasonably long day, so leaving early means less rushing to return to Melbourne at a sane time.

Those planning on Grampians hiking, should plan for that in advance. While hiking boots weren’t necessary for our hikes, lots of water, a hat, and sunscreen were. Many of the non-Australians on the tour struggled with the heat, and we weren’t even dealing with proper summer weather yet.

For food, you’ll want to bring snacks for the hikes and drive. As for lunch, we went to the Flame Brothers Restaurant in Halls Gap and that was really nice. Food there is mostly bar/bistro style food, but it was good.

Finally, if you do plan on staying longer in the Grampians, that’s a great idea. Halls Gap is the main centre for Grampians accommodation with cabins, motels and caravan parks. So that’s where you should base yourself.

Ever wanted to visit the Grampians for yourself? Have you done any of the various Grampians hiking trails? Please share your thoughts in the comments below.

*Disclosure: I travelled on my tour as a guest courtesy of Viator. As always, opinions are my own.