If you’re planning on visiting Tasmania, there’s every chance your trip is going to include some time in Hobart. After all, it is the largest city and capital of the island state. But there’s so much more to the city that makes it an effortlessly enjoyable destination. And the range of Hobart tourist attractions is a big part of that.

Before my last visit, I honestly thought of Hobart as just the gateway to southern Tasmania, the starting point for visiting Bruny Island and the Tasman Peninsula. I mean, I knew some of its major attractions from interesting areas and museums to the city’s iconic mountain. But each of these places to visit in Hobart, enhanced by the city’s calm atmosphere, was so much better than I expected. So if you need confirmation of what to do in Hobart, this list will get you started. 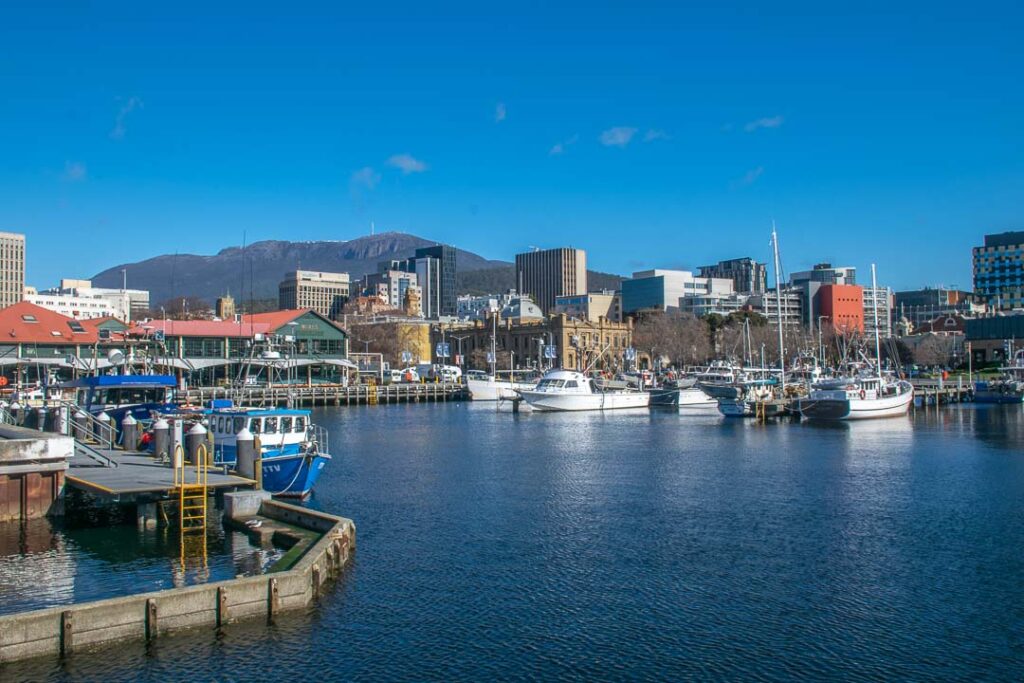 A nice place to begin your exploring when visiting Hobart is the city’s waterfront at Constitution Dock. It might seem like a place only useful for transit, whether for private boats or the ferry, but there’s definitely more to it. I’d actually argue it’s one of the most essential things to see in Hobart.

The Hobart waterfront is found downhill from the CBD, meaning it’s very hard to miss. Around it you’ll find several of the other attractions listed below. But the Constitution Dock area is also a fun mix of marina, seafood eateries, and views of the city skyline. You’ll also find a couple of sculptures and historic cranes there, all of which help highlight how historically important the docks have been to the city.

I feel like the Salamanca Market at Salamanca Place is one of the most talked-about attractions in Hobart. But before I visited, I really didn’t understand what the big deal was. Most days of the week, this is just one long park with some historic and admittedly photogenic buildings. However, come Saturday and the Salamanca Market fills the street.

Walk around the Salamanca Market and it’s impressive how many different types of stalls there are. I’m not much of a market person, but even I was impressed by the variety of stalls. Here you can find a lot of stalls focusing on handicrafts and regional produce, but there are also loads offering food and alcoholic drinks. Whether you’re after a meaningful souvenir, looking for something particular, or just hungry, the market won’t disappoint. 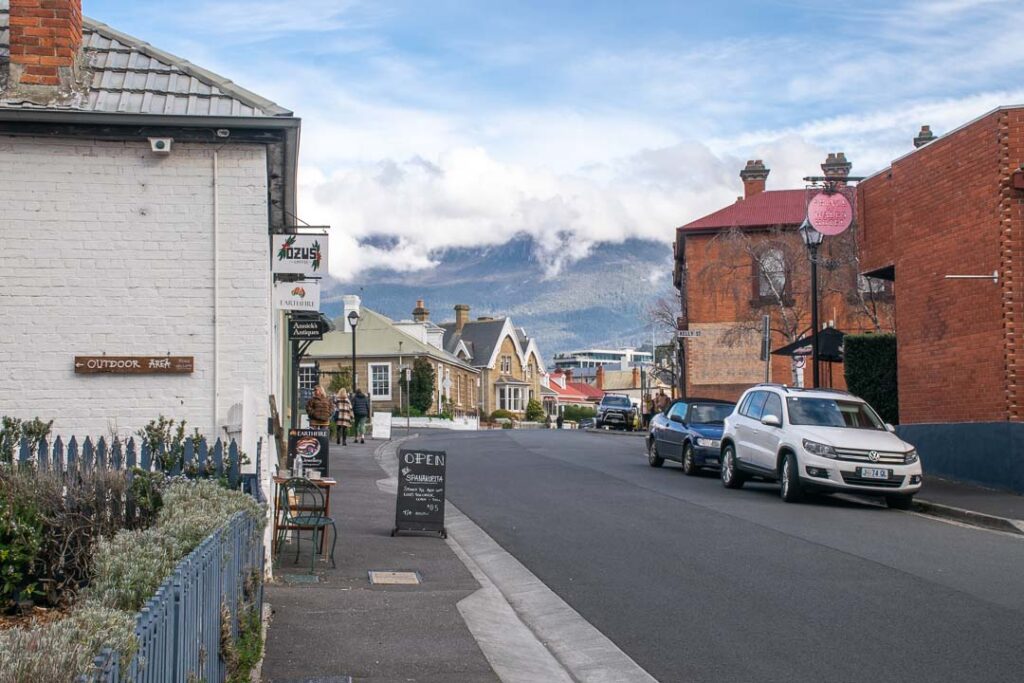 While there are a few nice buildings in the CBD of Hobart, it’s not really a place for sightseeing. For old-fashioned character, you’re better off going to Battery Point, south of Salamanca Place. It’s the kind of place you can just stroll around and enjoy.

This hilly inner suburb is quite a pleasant area of the city to stroll around, full of old stone and brick houses. Visit Arthur Circus Park to see cute little homes in a ring, or walk along Hampden Road for its colonial-style houses. It’s in Battery Point that you’ll find Narryna – the Merchant’s House, a museum house from the 1830s. 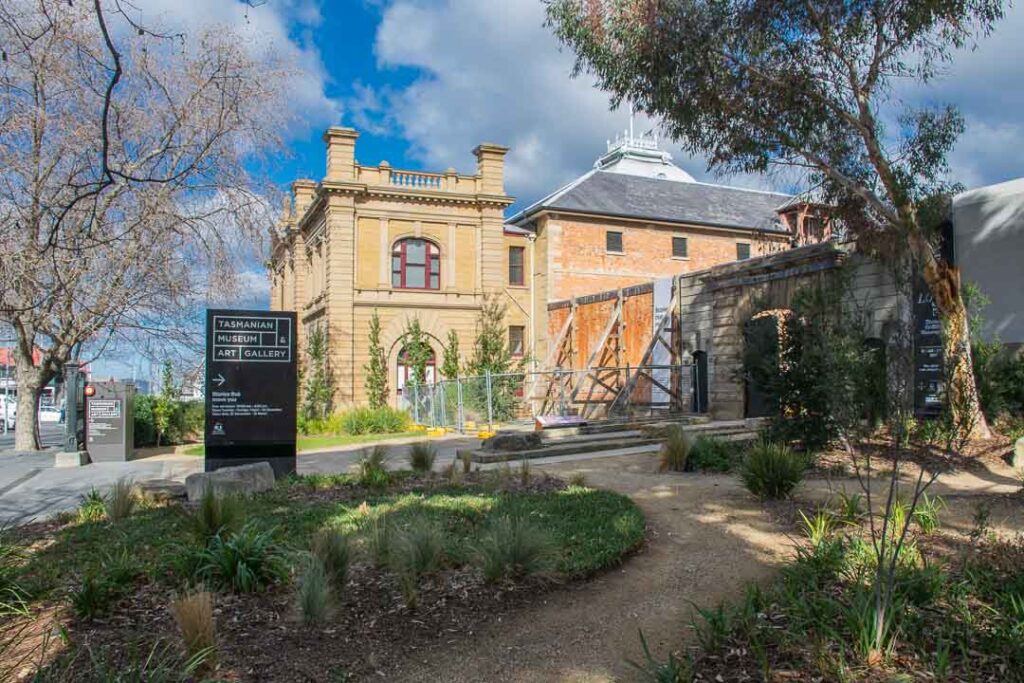 A great way to dive into the history and culture of Hobart and wider Tasmania is with a visit to the Tasmanian Museum and Art Gallery. Oh and admission is free! The museum covers quite a lot in its permanent exhibition, from history and art to the natural sciences. I was really engaged here, especially as I was reading a book about Tasmanian history at the time.

But the museum has also been working to give more focus to the traditional owners of lutruwita, through permanent and temporary exhibitions. The “Our land: parrawa, parrawa! Go away!” exhibit which focuses on the 19th century from the indigenous perspective was probably the most fascinating in the museum. 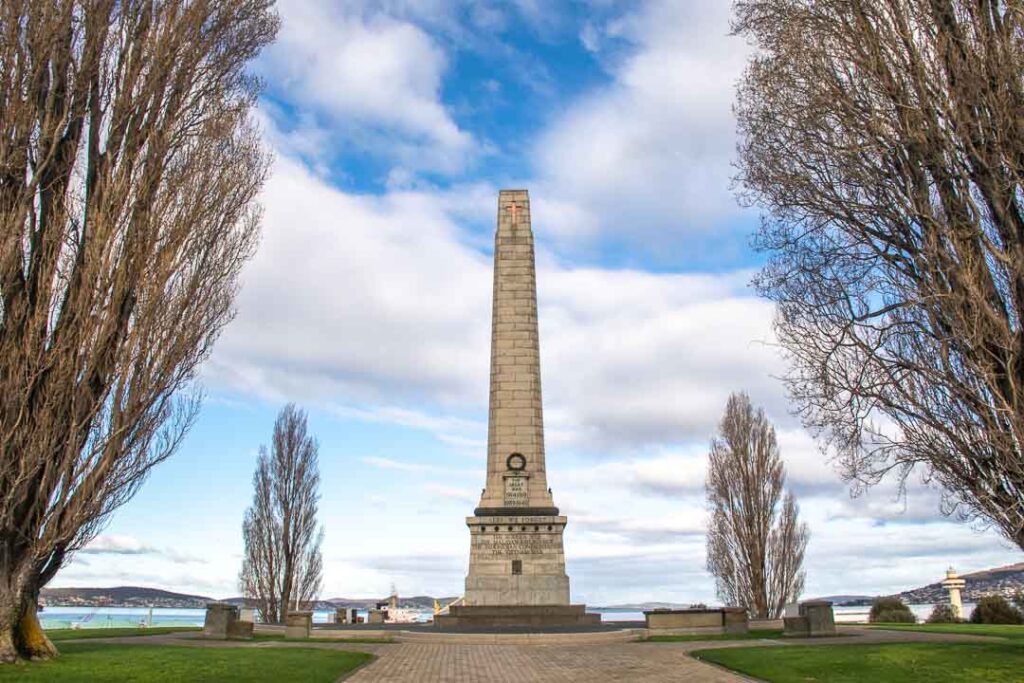 Looking for somewhere just out of the city centre with decent views of the river and the Tasman Bridge? Then make the short walk up to the hilltop Hobart Cenotaph, the main war memorial in Tasmania.

With a wide open park around it, you almost get a 360-degree view of Hobart up here, although the view to the CBD isn’t too revealing. The Cenotaph stands directly over Macquarie Point, which is due for development, so who knows what the view will be like when/if that happens. 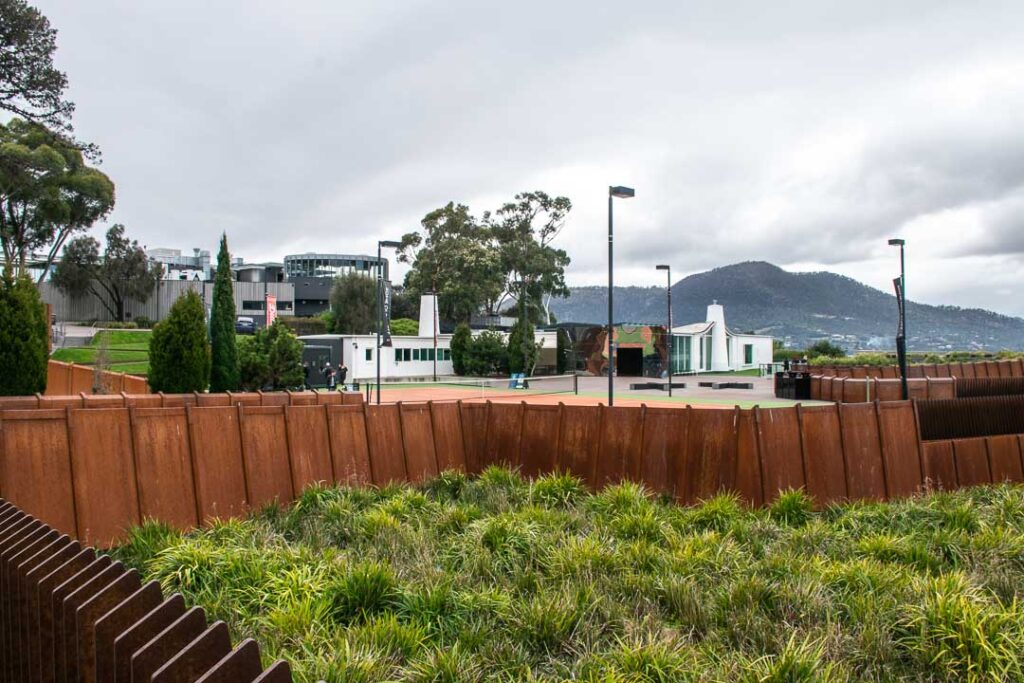 World-famous and rightly so, MONA is one of the most memorable attractions in Hobart you could think to visit. It’s fair to say that some exhibits inside aren’t for everyone but that actually seems to be the idea. But if the prospect of that doesn’t intrigue you, it’s probably not for you.

Honestly, trying to describe this art museum on a winery in the northern suburbs of the city is just too damn hard. How do you describe a museum that is constantly changing in strange and unexpected ways? It’s hard to even know what’s in store for you when you arrive, as the museum is almost entirely subterranean.

My MONA visit included too much to mention, but some of the more straightforward exhibits were: 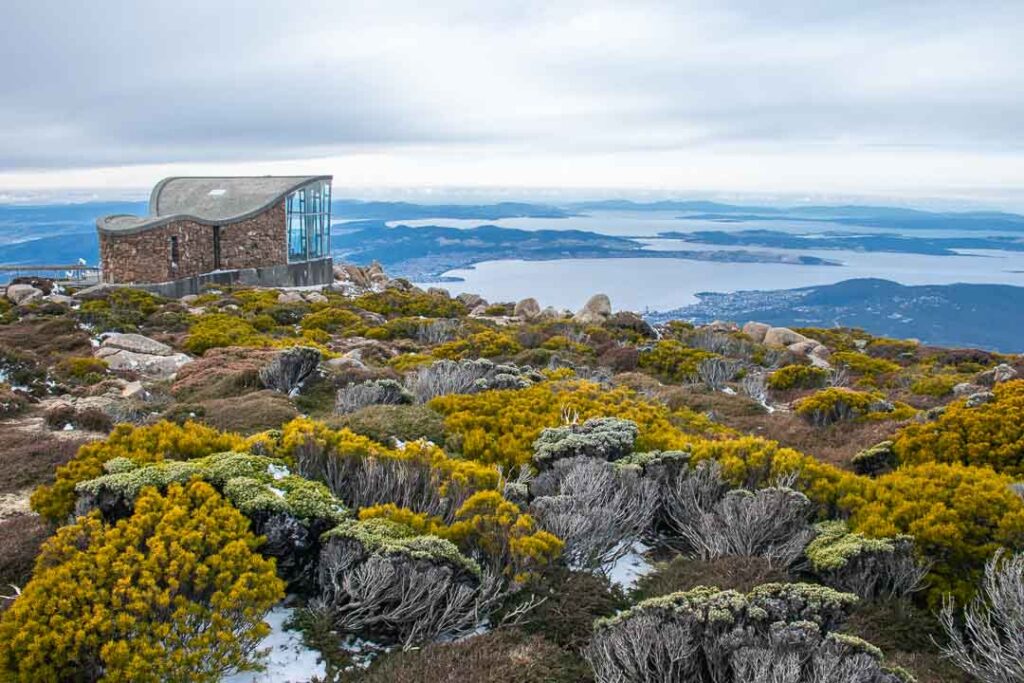 Watching over Hobart, kunanyi – also known as Mount Wellington – is an iconic landmark of the city. If you have the time, it’s best not to miss the chance to visit its summit, whether by car or bus.

The panoramic views from the top of kunanyi are just phenomenal. Not only do you see all of Hobart at once, but also the ribbons of coast wrapping around the River Derwent. Go up there in winter and you’re bound to see snow, as I was there in September and there were still quite a few patches.

It’s possible to hike Mt Wellington if you have the legs for it. Those with less time available or less fitness will find plenty of other walking trails across the mountain to explore. I went for the gentle and peaceful Bracken Lane Fire Trail, which takes you to the small O’Grady Falls waterfall, one of several in the area.

Other Attractions in Hobart 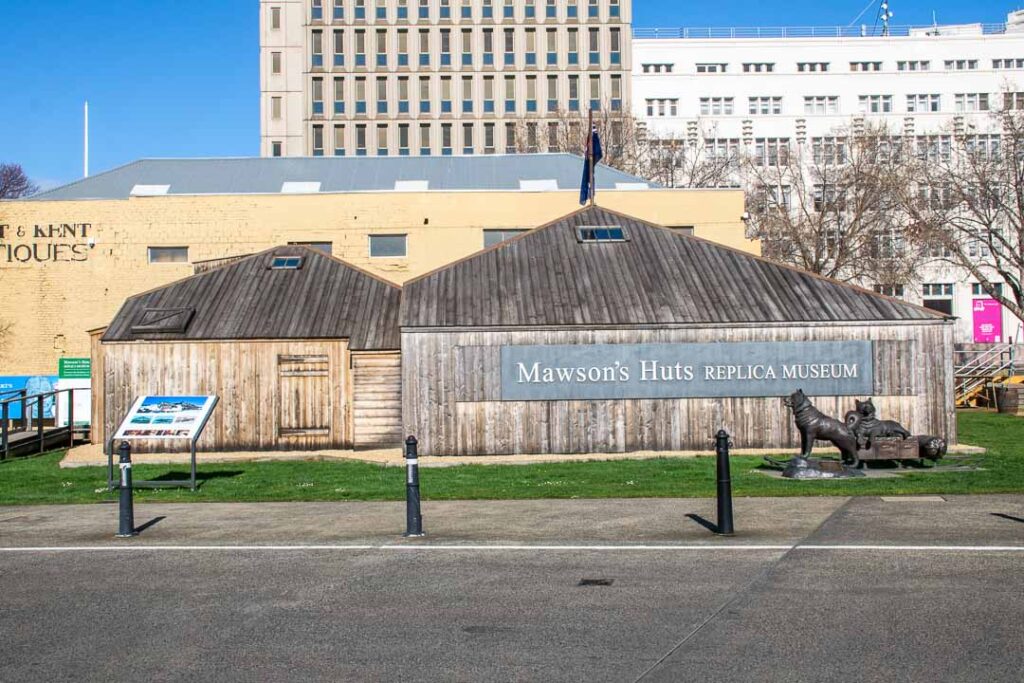 Because I had limited time in the city with a day trip to Bruny Island planned, there were some attractions I couldn’t fit in. One was Mawson’s Hut in the city centre, but I decided to focus on the other museums above. Then there’s the Hobart Convict Penitentiary, another city museum you can visit, but one with quite an expensive ticket. 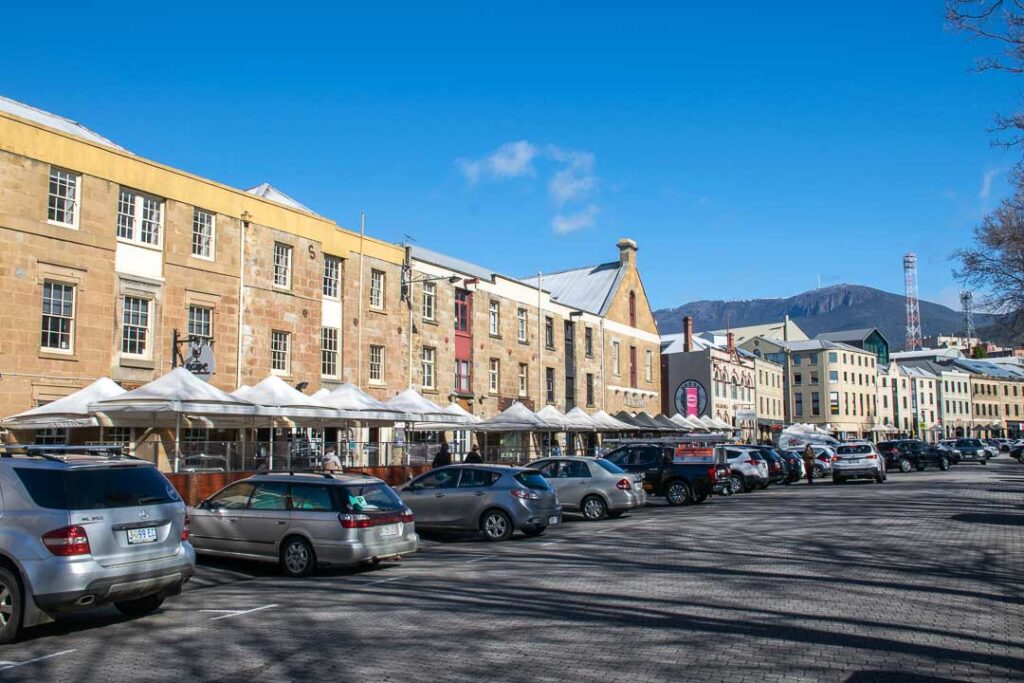 Staying in Hobart won’t be hard to arrange with loads of accommodation options to choose from. If you’re after a recommendation though, the RACV Hobart Hotel is a really good 4-star hotel. It offers large, modern rooms in a great location. Normally, it would be out of my price range, but I was able to get discounted low season rates while interstate travel was still closed.

I wish I could say that I know where the best coffee in Hobart is. Surprisingly though, I visited very few coffee places. The one cafe I’d happily recommend is Criterion Street Cafe, as much for their breakfast/brunch menu as for their coffee.

Speaking of food, I was really pleased with the variety of options around the Hobart CBD. Fish Frenzy is perfect for getting great fish and chips. Cheap and tasty options for Asian food include the Malaysian food at Sawak Cafe, dumpling at Pot Sticker Dumpling House, and Vietnamese at Ja & Jon Banh Mi. It was all a nice change of pace from the limited options elsewhere in Tasmania.

If’ you’ve visited Hobart or lived there, what would you say are its best tourist attractions in Hobart? What are you favourite things about this lowkey but endearing city? Please share your thoughts in the comments below.