For all my time spent in Austria, there was one obvious activity I’d wanted to do and that was to go hiking in Austria. My trips had always revolved around the country’s cities and picturesque towns, mostly because they’re more accessible. So when the opportunity arose to tag along on a trip to the Defereggen Valley among the mountains in Austria, I was in.

Later in the trip I’d tackle the hike at Schafberg, but before that I had several days doing walks and hikes through the Defereggen Valley, or Defereggental as it’s called in German. With its imposing mountains, lush forest, and wide open fields, it was exactly what I imagined the Austrian Alps would be like. Here are the different walks and hikes in the Defereggen Valley I did to see some of its different angles. 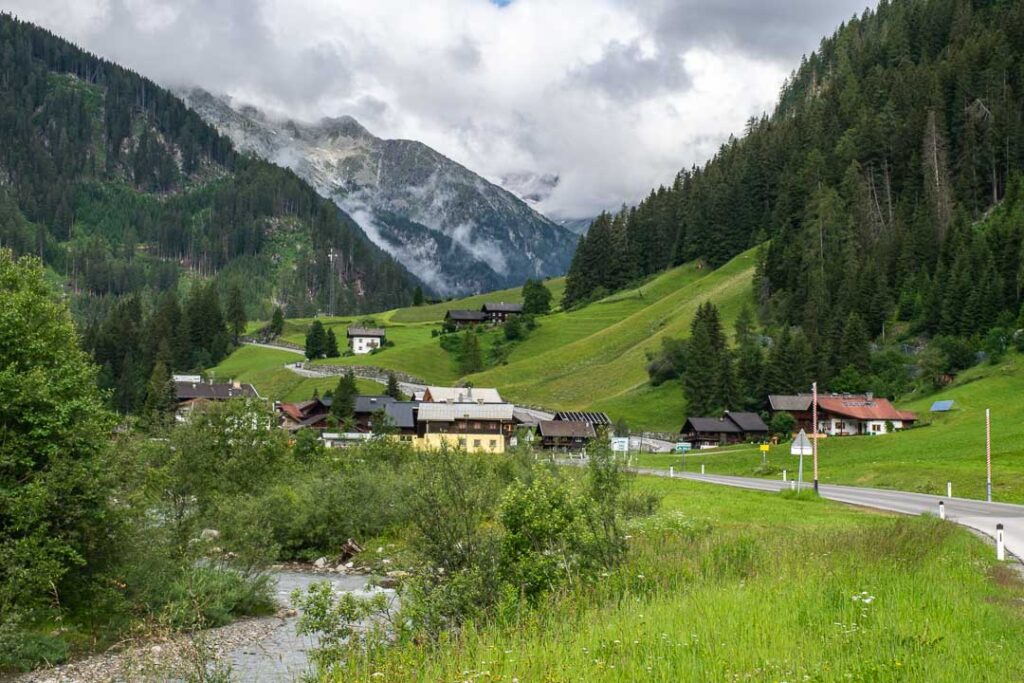 So, what and where is the Defereggen Valley?

Well, the Defereggen Valley is a narrow and very green alpine valley in the East Tyrol district of southwestern Austria. It’s part of Hohe Tauern National Park and actually lies not far from Großglockner, Austria’s highest mountain peak. The valley runs right into the border with Italy and is one of the least populated places in all of Austria. Combine all these ingredients and you have a winning recipe for a trip away.

With mountains either side of the valley and many more beyond, I’ll give you two guesses what people come here to do. Winter sees people visit for skiing, but especially cross country skiing. As for the warmer months, hiking and also mountain biking, are the go-to activities. 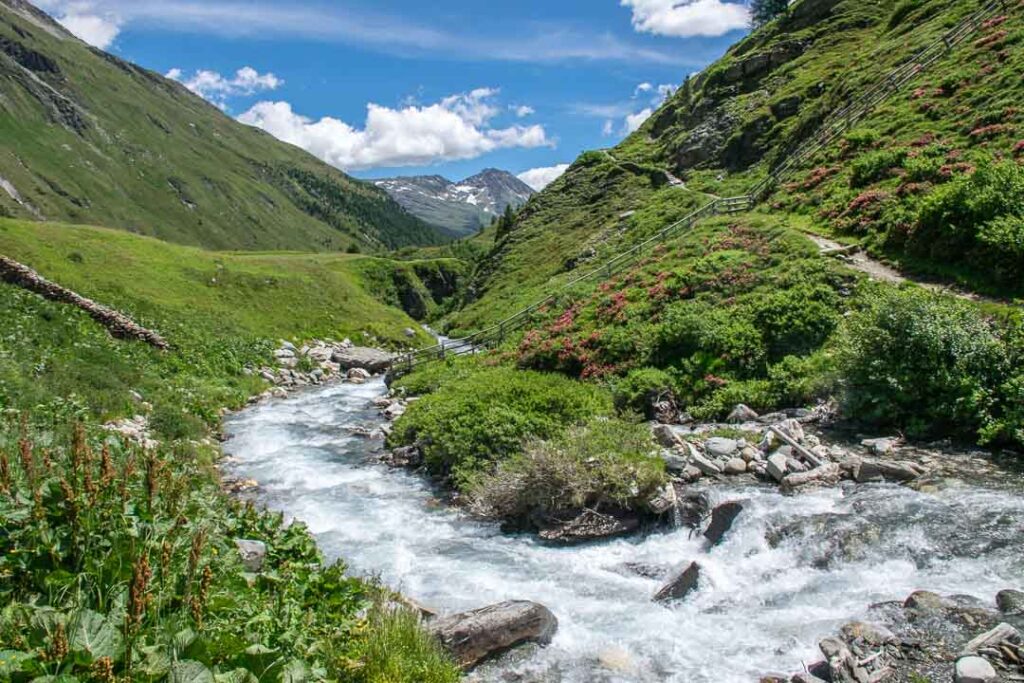 Exploring the valley you’ll come across countless different hiking options. I only had a few days there, so was only manage to do the ones mentioned here. However, it’s a place you could endlessly return to each year to further explore, and people do regularly come here for their walking holidays in Austria.

As is the standard with Austria hiking trails, you’ll find regular and informative signs on pretty much any trail you encounter. Austrians (and more broadly, a lot of Central European countries) take hiking seriously and there’s an obvious aim to make it more accessible to everyone. 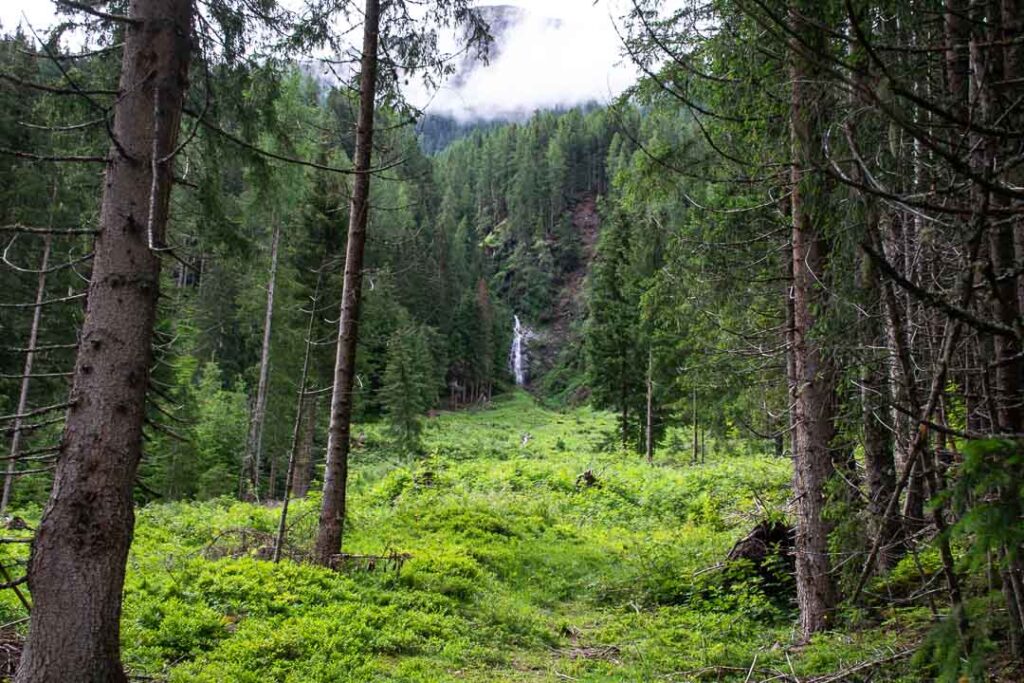 Besides trying to reach the highest summits on the different mountains along the valley, there are other landmarks to search for when hiking here. Defereggental is home to lots of waterfalls, many of which you can spot from a distance, giving you another natural landmark to seek out. Interestingly, several of the ones I spotted aren’t shown on Google Maps, making these hikes a little harder to plan. 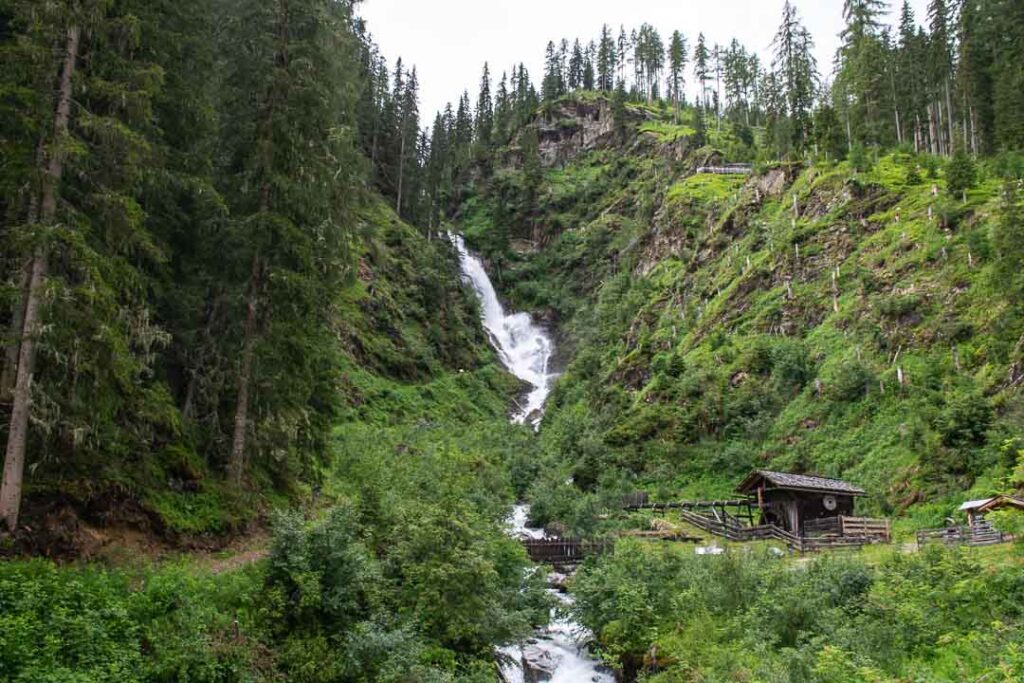 In the Defereggen Valley, the most accessible walk is the one along the valley’s river to the Maria Hilf Waterfall. With flat trails and a nice waterfall reward, it’s the ideal walk for before or in between tackling the proper hikes.

Getting to the Maria Hilf Waterfall (also marked down as the Stallebach Waterfall) will depend on where you’re coming from, common options being St Jakob in Defereggen, Grünmoos and Mariahilf-Kapelle. Generally, you’ll first want to cross the Schwarzach river, at one of the many bridges. Then it’ll be a walk along the mostly flat riverside track through forest, with the potential to pass another small waterfall in the process. 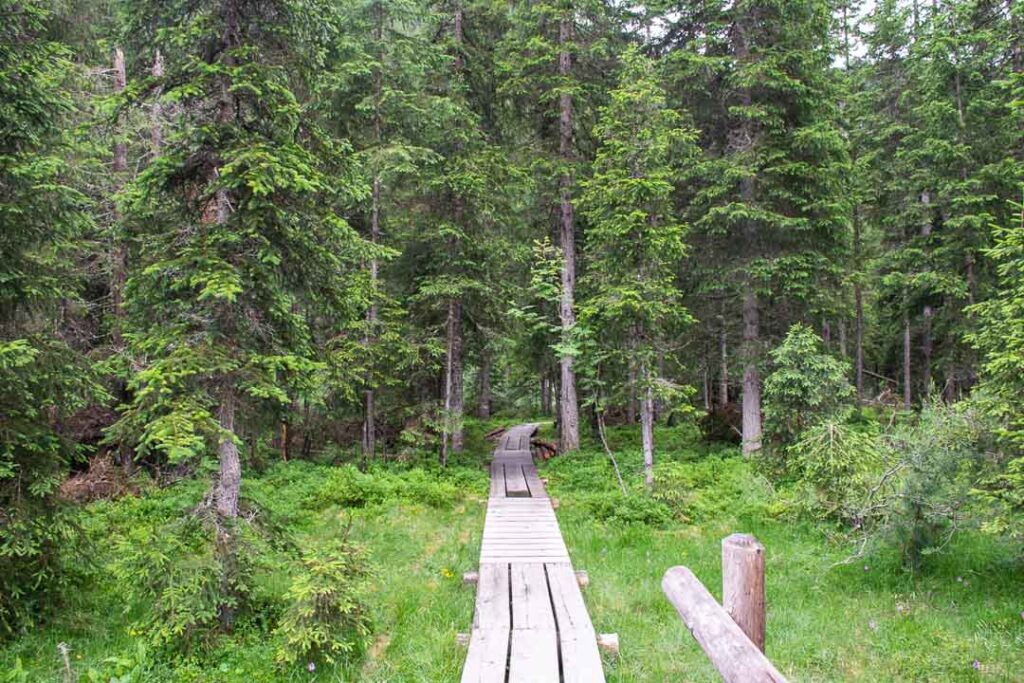 A path follows the Stallebach stream up to a tiny bridge, where you’ll find the most accessible view of the waterfall. It really is a gorgeous spot, with the waterfall disappearing into the forest and an old-fashioned water wheel by its side.

However, way up the right hand side of the waterfall you’ll see a viewing terrace where you can go for an elevated view. The walk up is much, much steeper, but also comes with the benefit of offering views of the valley.

If it does interest you, just follow the path lined with lupins, or follow the signage to the “Aussichtsplatform”. But I actually visited the viewing terrace on a different walk, so more on that in a bit. 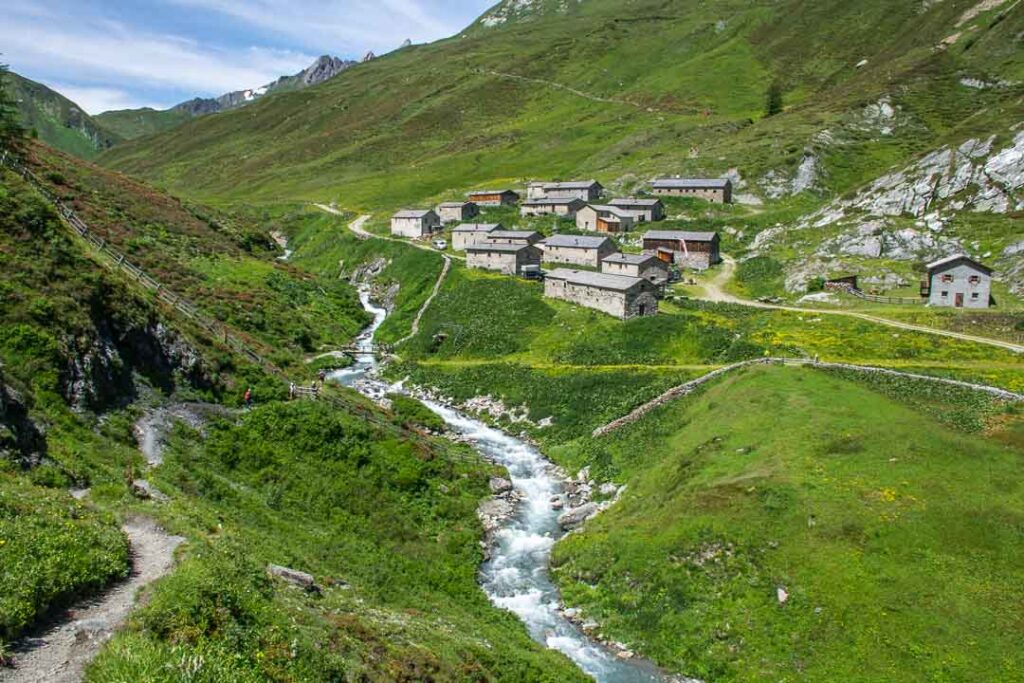 If there’s a classic hike in this specific corner of Austria then it’s the trail out to Jagdhausalm. With its brilliant scenery and uncomplicated trail, you could easily argue it’s one of the more special places for walking in Austria. Following the river valley as it bends north, this hike takes you to the tiny mountain village of Jagdhausalm.

Now, when I say tiny, I mean it. Hidden up near the Italian border, Jagdhausalm is made up of just 16 stone houses. Surrounding the village lies plains and plains of historic pastural fields that have been used for cattle grazing for centuries.

In fact, each year, there’s a cattle drive from the Italian side of the mountain pass into the area. We were actually lucky enough to see some of the cows coming in and even got stuck behind them driving out after our hike. 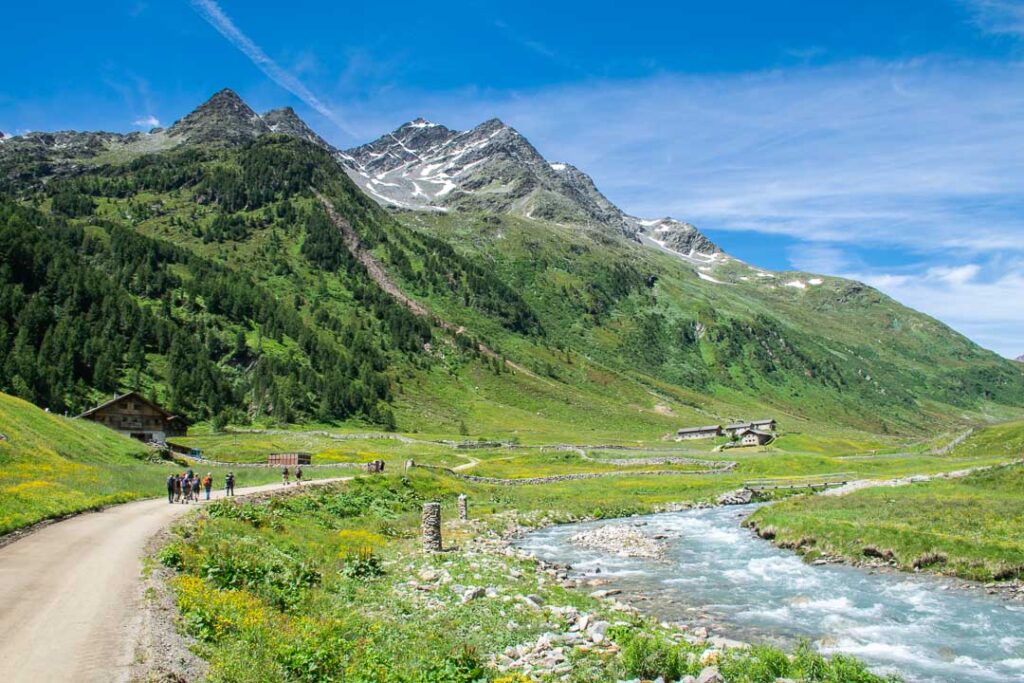 The hike to Jagdhausalm follows a riverside trail, just off the valley’s main road. The distance of your hike will depend where you leave from. For us, it was roughly 8 or so kilometres each way when leaving from the Patsch car park. You’ll be walking along a combination of dirt tracks, grass trails, and unmade road. As such, it’s not a technically difficult hike and comfortable walking shoes will do fine.

At first you start on forest trails, with its share of rises and dips as you look down on the icy Schwarzach river. After a while though you break free from the woods as the valley widens out to broad grassy fields. It’s at this point that you start seeing the highest mountain peaks of the valley, some still covered in snow in late spring. 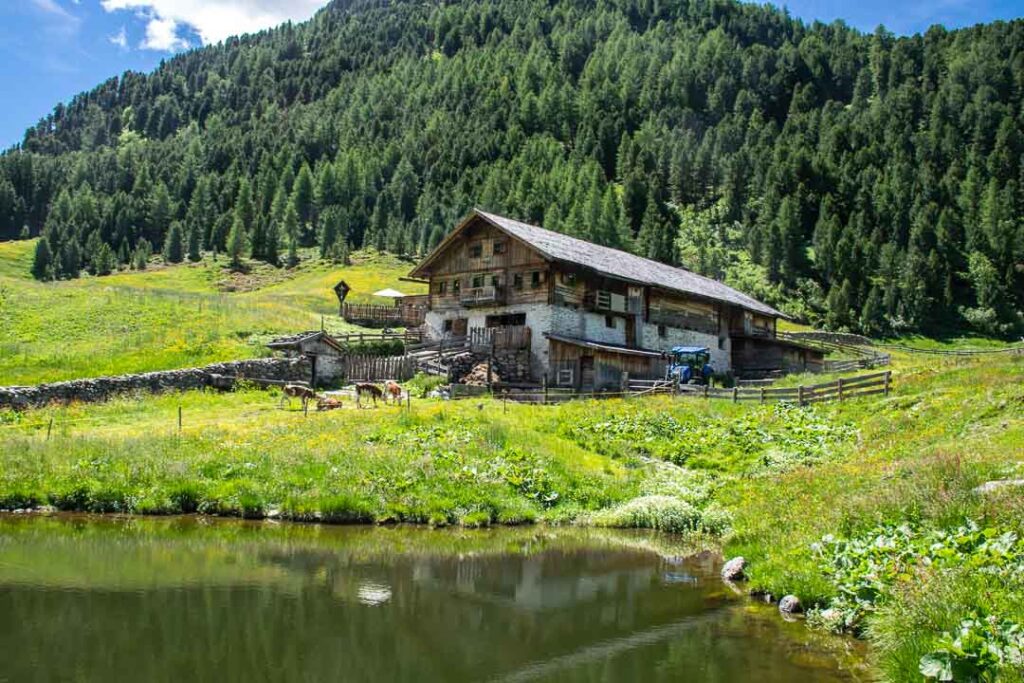 Despite its remote setting, there are some occasional farmhouses that you will pass on the unmade road. There was even a small stall outside one farmhouse selling snacks and produce to hikers.

Once the gradual rise starts to get steeper, you know that you’re getting close. Eventually, you’ll leave the Schwarzach river for the Affentalbach river, and around the next corners lies the village of Jagdhausalm.

We made the village our end point, but you can follow the path right out to the Italian border if you like. After lunch at the village tavern, we took a look around the stone houses and watched some marmots scurry in far-off fields. Then it was time for the walk back. 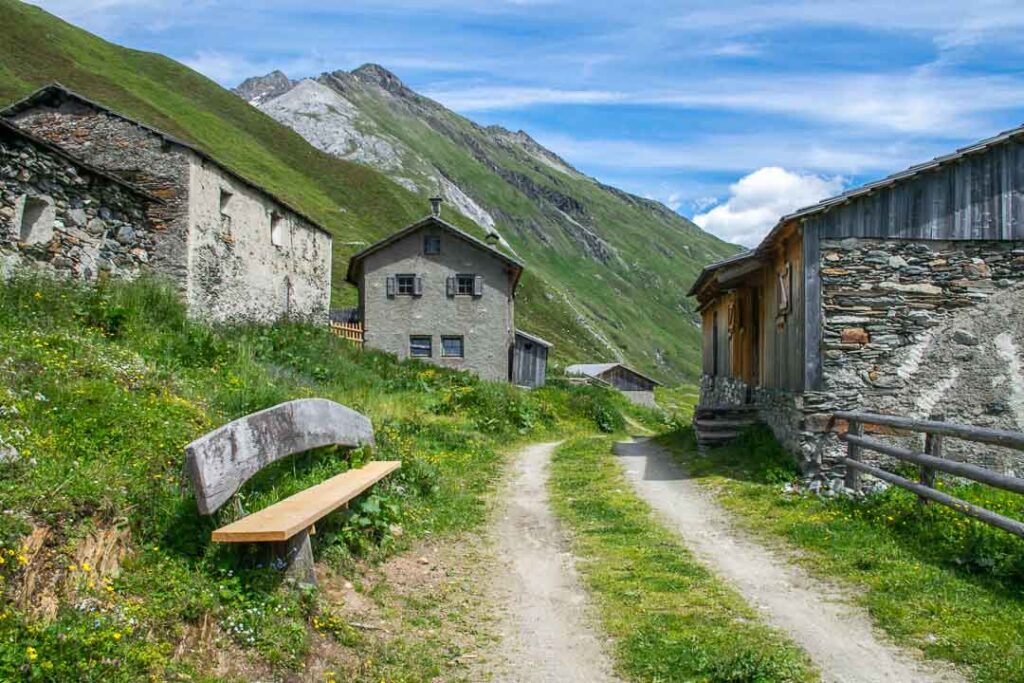 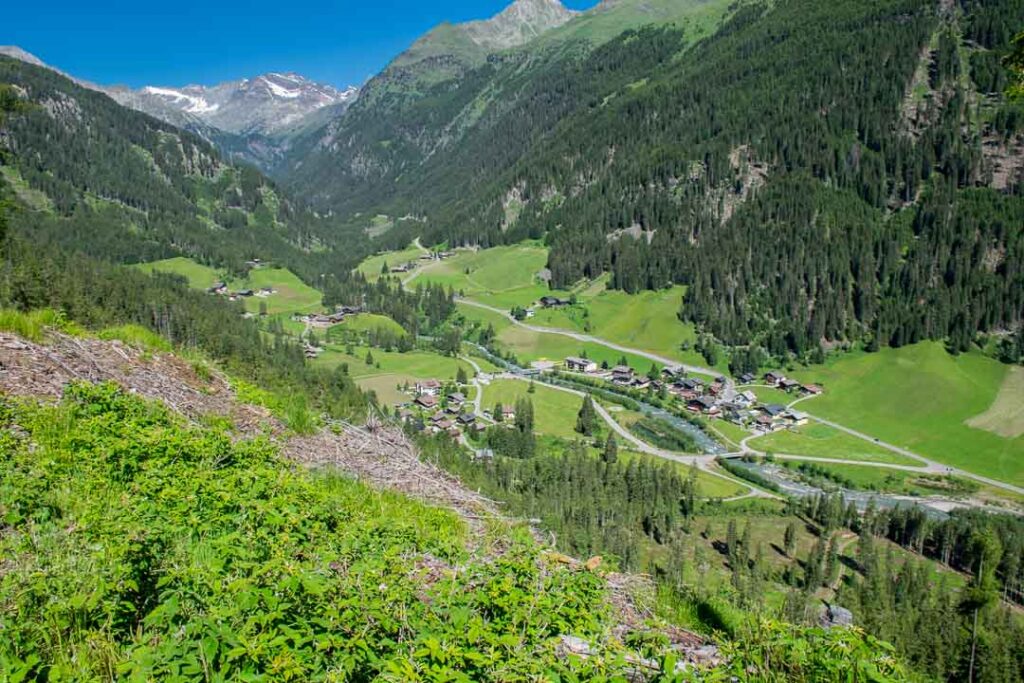 My most adventurous hike in Defereggental though was when I decided to do some exploring on my own. The mountains behind the Maria Hilf Waterfall looked like they had plenty to offer, so with only minor planning I set out to see what was there. It turned into quite a fun and tiring half-day hike, full of much different scenery than I’d previously encountered.

I picked up the trail down by the river just a little west of St Jakob in Defereggen, heading up into the hills to the south. Signposts marked it as the 84 trail towards Jesachalm and Langschneid, the latter I knew to be the mountain peak in that direction.

Although the track was initially a wide gravel path, soon enough it changed to very narrow grass and dirt paths, but thankfully there were still enough of the well-maintained Defereggental wandern signposts and trail markers. 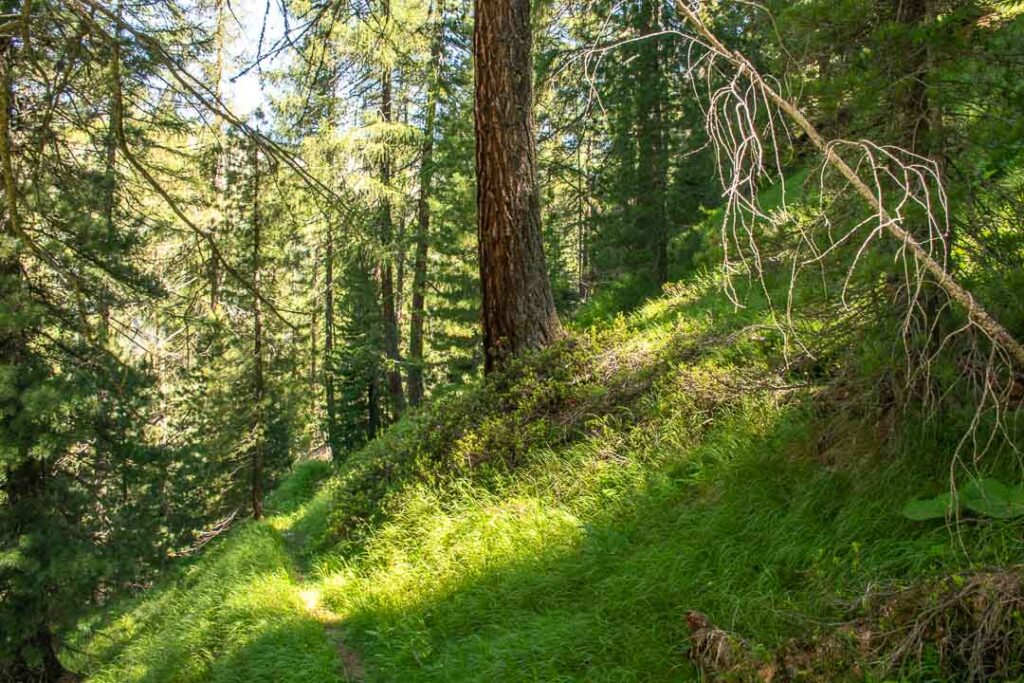 Things started to get interesting when the trail encountered one waterfall or stream after another. Some spots had little wooden planks to cross, while others were shallow enough to walk through. Every once in a while a break in the trees offered clear views back down to the valley and the opposing mountains. It was these occasional views that made me realise just how much elevation I was gaining.

This constant climbing was making me quickly appreciating how much harder this hike was than the others. Unlike the previous days, the trail takes you on a steep climb straight up the side of the valley and I was still a little tired from the previous day. It soon became apparent I wasn’t making it to the top of Langschneid that day, but I persisted.

What makes this such an interesting hike is how varied the trail feels. At times you’re passing through cattle-proof gates on a nice path past little log huts. Other times, you’re on raised walkways over flooded ground with untamed grass up to your waist. 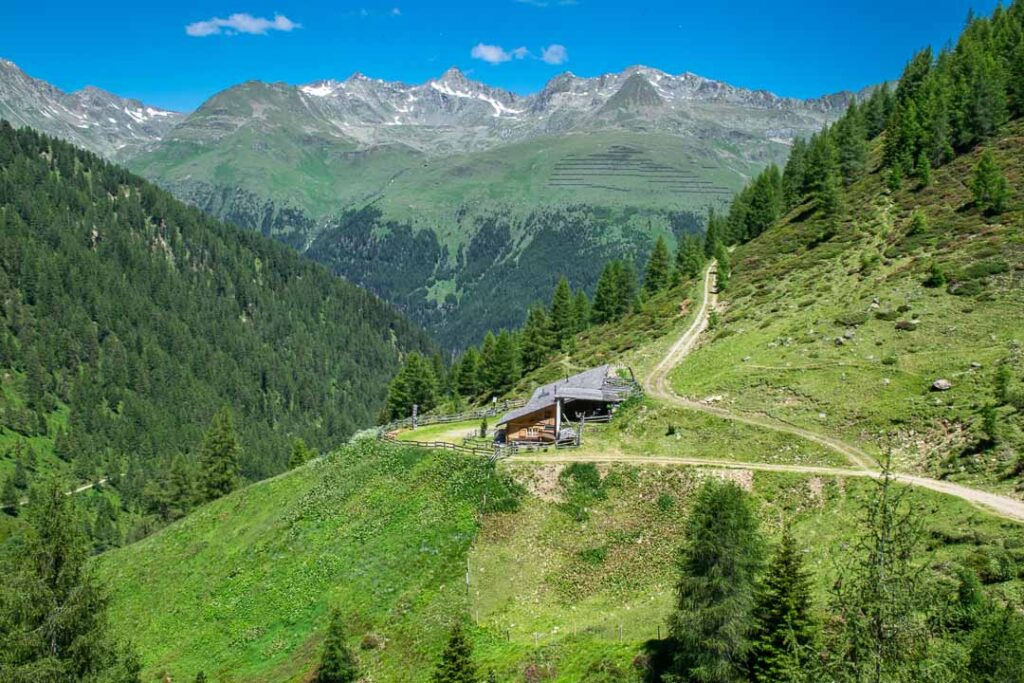 It was when I reached the small unoccupied lodge of Jesachalm that I decided it was time to turn back. At this point I had climbed over 600 metres from the river to the lodge’s elevation of 2002 metres. More importantly, there was a wide unmade road that clearly looped back down to the bottom of the valley.

Since walking on a gravel road isn’t very interesting, there’s not much to say about the climb down. I’d walked most of the way back before I found the Jausenstation Alpe-Stalle, a hut for hikers, where I was able to get lunch from its friendly owners.

Happily refuelled with beer and sausages, I continued back down until to my surprise I arrived at the viewing platform for the Maria Hilf Waterfall. The views from the platform are definitely worth the climb up, but it really is quite a steep path, which isn’t too fun to go down at the end of a hike. 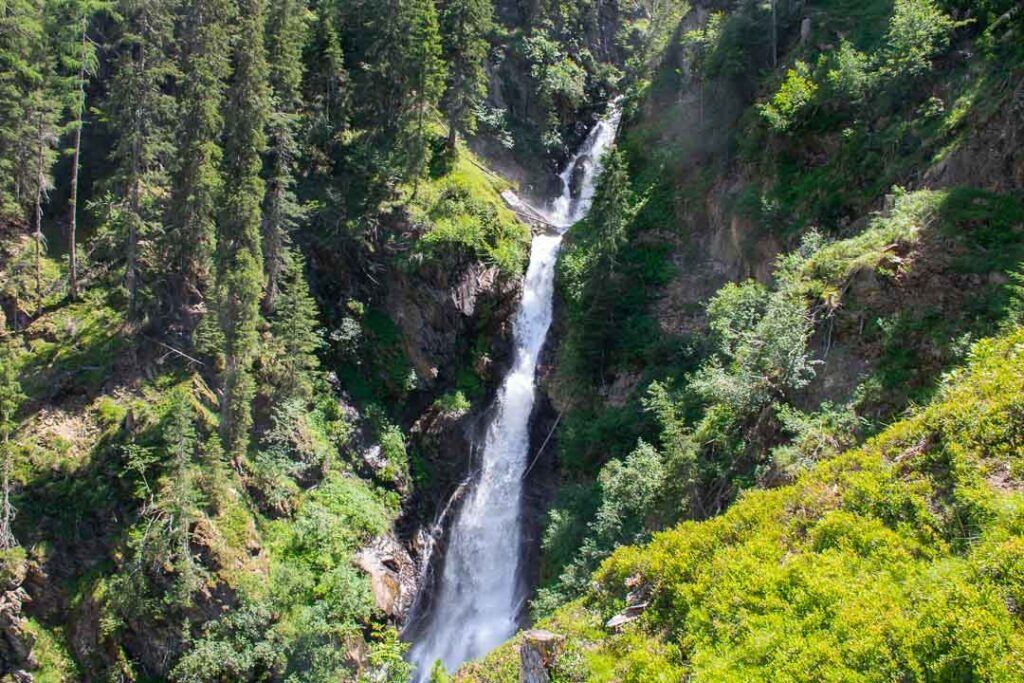 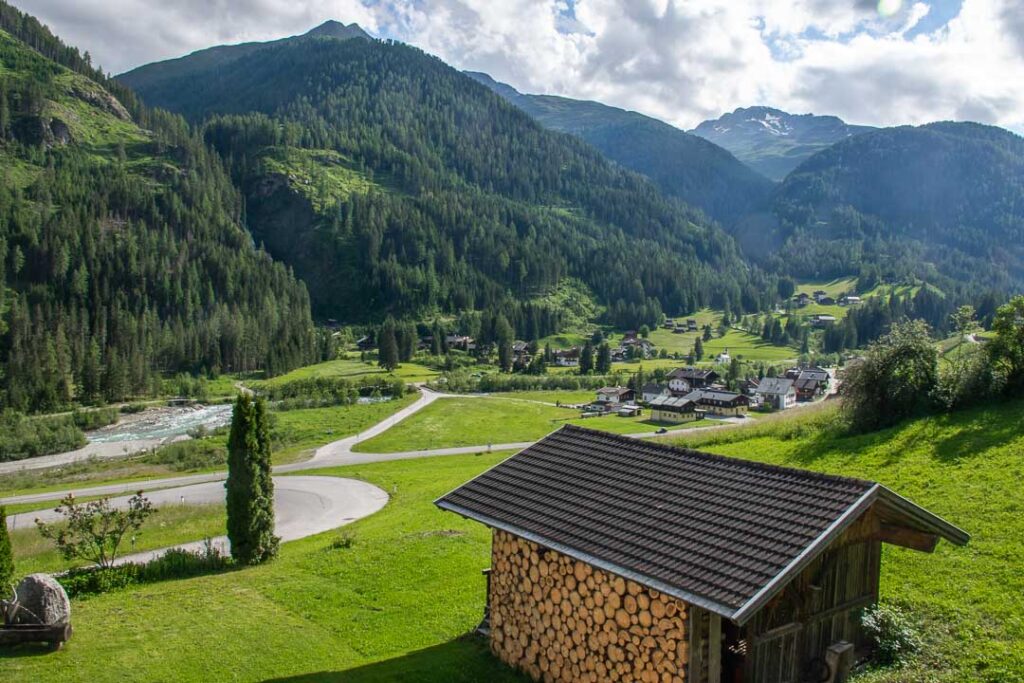 Because it’s found way off in the mountains, it’s worth talking about how to get to Defereggen Valley. Although technically possible, getting there by public transportation can be challenging. First you need to get a train (from Vienna/Salzburg/wherever) to Lienz, then a bus to Huben at the start of the valley, and then another passing through all the villages.

All of that is to say, you really want to visit Defereggen Valley by car. It’ll make getting there easier and also make hiking to Jagdhausalm easier. I do have one word of warning if you plan to come from Italy or even just cross the border though. Traffic is controlled on the border here as it’s a narrow, winding mountain pass, so it travels in one direction then the other at intervals. When it’s busy in summer, even a small amount of traffic can lead to a wait.

St. Jakob im Defereggental is the main town in this part of the valley and as such is where you’ll find many of the Defereggental hotels and accommodation. We stayed at the Ledererhof Apartments in the Mariahilf-Kapelle area. Although the rooms aren’t anything fancy, they’re comfortable and offer great views.

During our time in the valley, we ate at several guesthouses and restaurants around St. Jakob im Defereggental. I think the best meal we had was at the Naturhotel Tandler, which apparently is also a very nice hotel.

Have you ever dreamed of hiking in the Austrian Alps? Which of these hikes in Defereggental do you think would most suit you? Please share your thoughts in the comments below.