Perth makes a great base for exploring more of Western Australia. But you don’t have to drive all way out to Albany or Margaret River to see more of the state. There are a bunch of day trips from the city that you can do, with one of the easiest being Rottnest Island. This small island off the coast is one of the most popular places to visit from Perth, so I knew I had to visit.

But rather than just do an easy-going Rottnest day trip, I decided to mix things up and try something different. And outdoor destinations are perfect for that. For two days, I cycled to different parts of the island, admiring its rugged cliffs and gorgeous beaches. And rather than stay in a hotel or holiday rental, I got a taste of what the Rottnest camping experience is like. So, if you’re looking for ways to get more out of a Rottnest Island trip, this might be of interest to you. 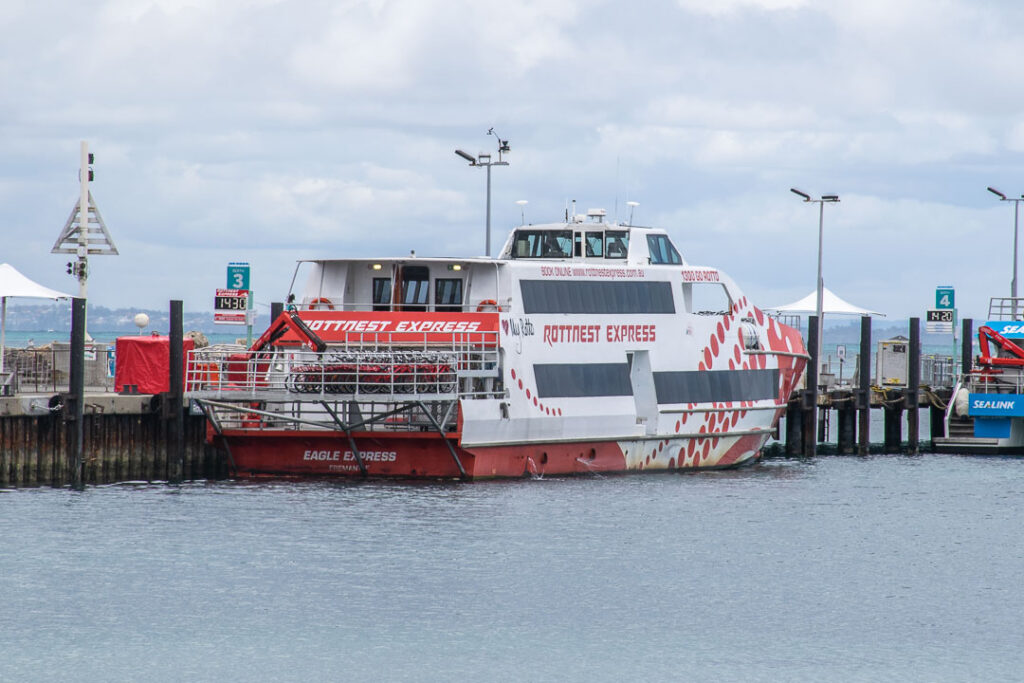 When it comes to getting to Rottnest Island, it couldn’t be more simple. The small island is just off the coast from Perth, meaning going by ferry is the most obvious approach. Ferry trips take between 30 minutes and an hour depending where you go from and it can get choppy so bring meds if you get seasickness.

Rottnest Express and SeaLink both offer Rottnest Island ferry services multiple times per day, with fewer services over winter and more in summer. Ferries from both providers leave from B-Shed in Fremantle and Barrack St Jetty in Perth. It’s both cheaper and quicker to leave from Fremantle, as you can just take the train there. That said, cruising down the Swan River out of Perth is sure to be scenic.

Booking your ferry to Rottnest Island is an important step in planning your visit. First you will need to decide if you want to do a Rottnest Island day trip or whether you want to extend your visit to come back another day. But most tours are bundled with ferry tickets, so you’ll need to decide how you want to visit when booking. I decided to visit independently, but it’s possible to book tickets with a bus tour or even get tickets with a boat tour around the island. 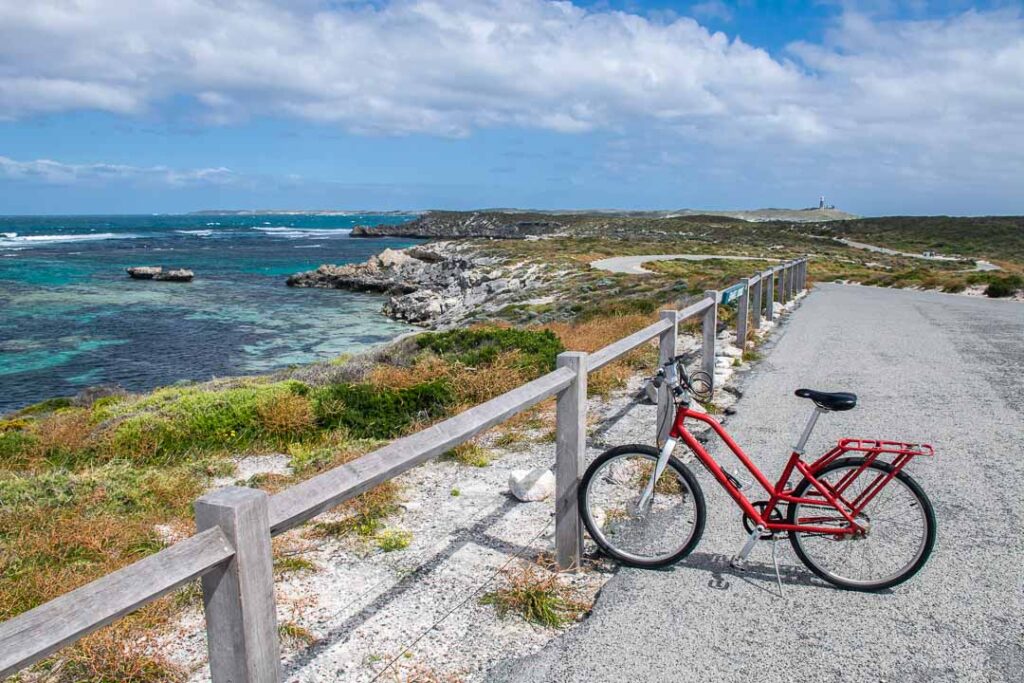 If you do decide to visit Rottnest Island independently, then hiring a bicycle is a smart idea. Cars are not permitted on the island, and while there is a hop-on/hop-off bus, it runs every 45 minutes. So unless you like waiting for buses or walking, cycling is the fastest way to freely explore.

Now, fair warning, the island’s roads are rarely flat. But even someone who rarely cycles like me can manage. There’s even the possibility of hiring electric bikes on the island which will take a lot of the work out of getting about. 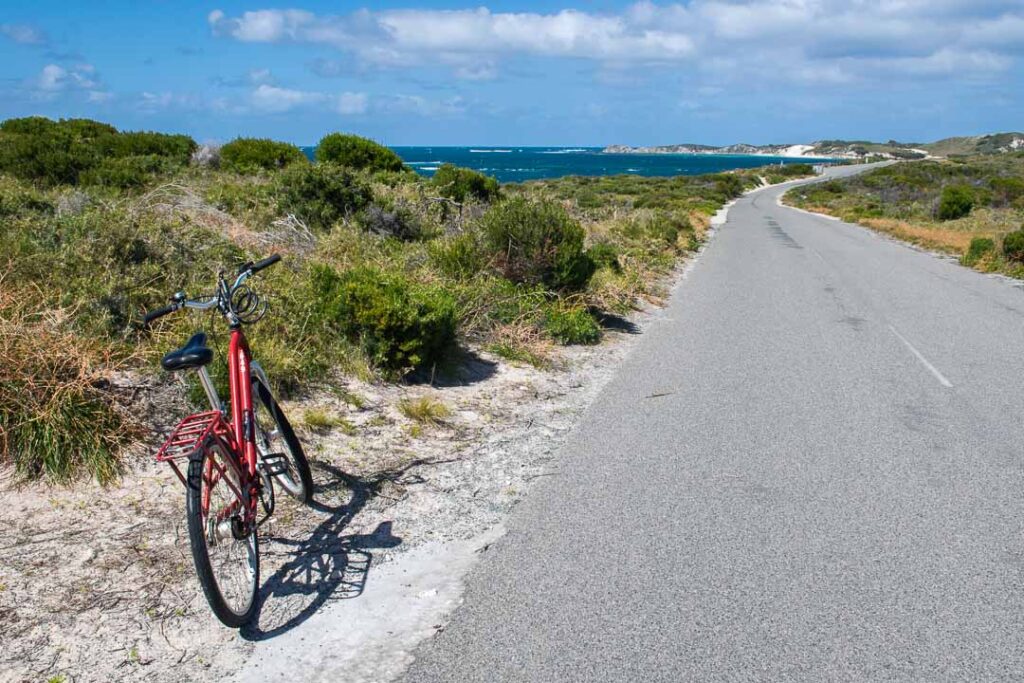 Deciding where to hire your bike from is the tricky part. You can hire bikes for Rottnest Island with both the ferry companies, as well as from the Pedal & Flipper company on the island.

The bikes from the ferry companies are packaged with ferry tickets, making them the most affordable option. However, I believe the bikes available on the island are meant to be generally better quality. I got mine with my ferry ticket and while it maybe wasn’t the best bike it still got me around for two days. 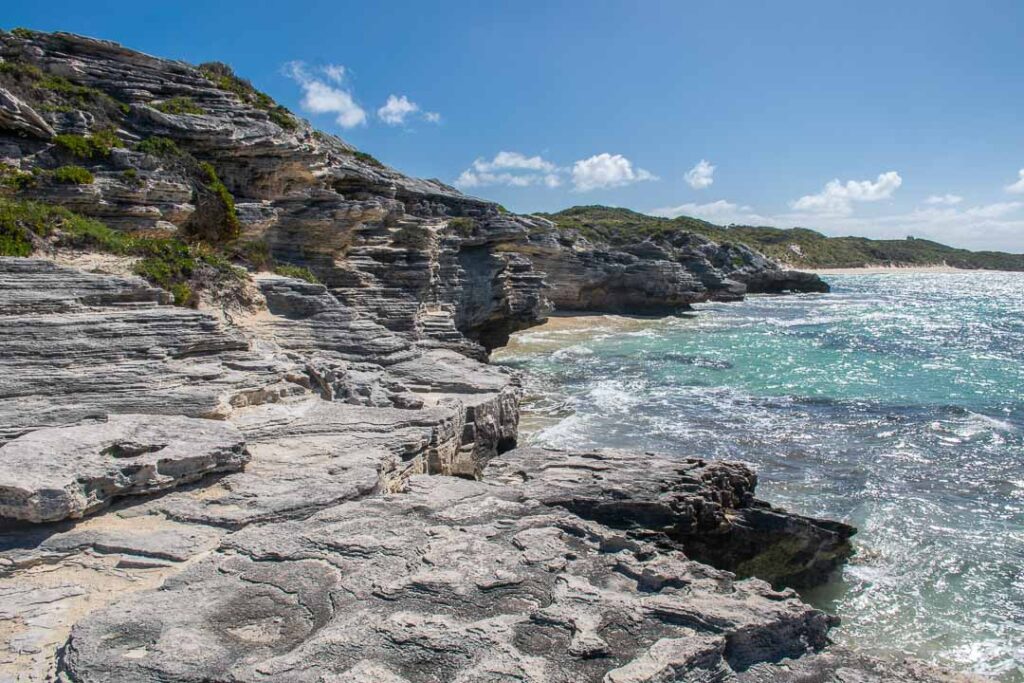 With two days to explore the island, I had plenty of time to see everything on the island I wanted. Because of that, I didn’t really come in with much of a plan for sightseeing. But I had been told about several spots along the island’s south coast, so that’s where I started.

After arriving at Thomson Bay Settlement on the ferry and getting coffee, I cycled down to Kingston Barracks. This area features one of the main historical landmarks on the island and the first of many beaches. Things start to get really interesting though when you reach the cool rock formations at Henrietta Rocks that you see above. 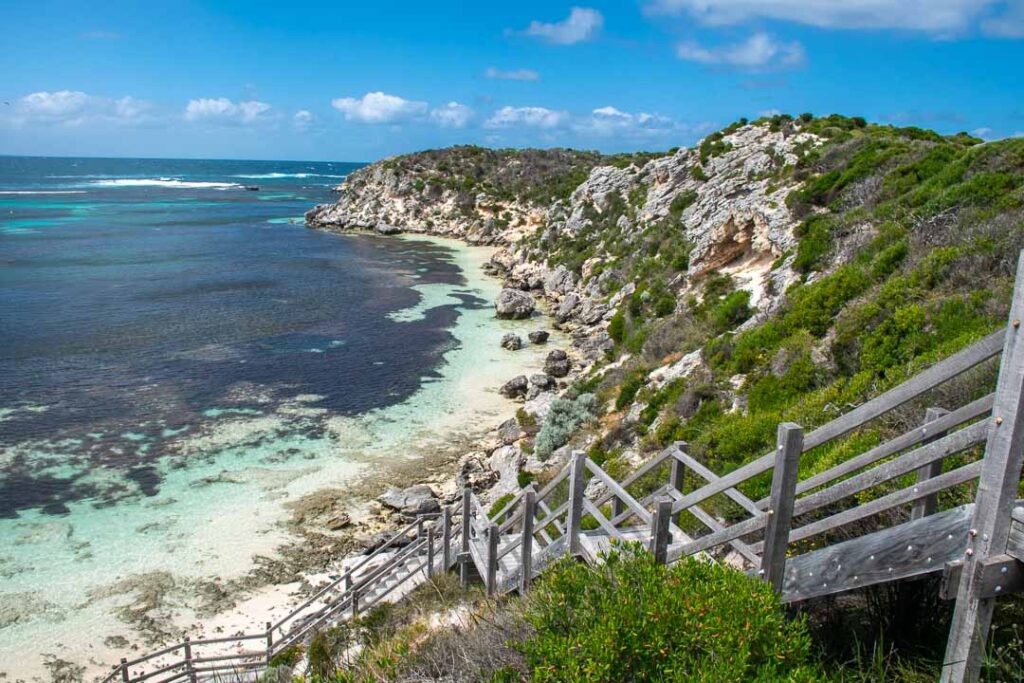 Following the south coast it basically alternates between beautiful beaches and clifftop lookouts. Some beaches like at Salmon Bay are great long stretches of white sand, while others are tucked away in little coves. The perfect combination of those features is at Parker Point, with its long staircase down to its small beach. 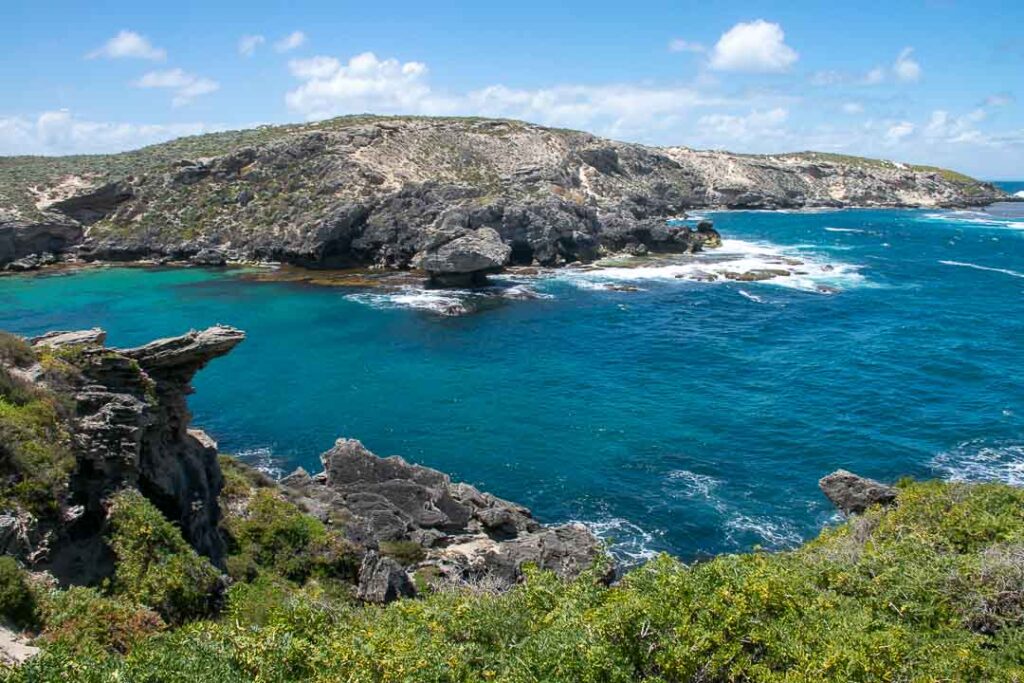 To reach the far end of the island you’ll need to cross the Narrow Neck onto a small peninsula you can explore in a loop. For me, I actually decided to park my bike at a bus stop and follow the walking trails so I didn’t miss anything. First, I went to South Point and across to the Cape Vlamingh Boardwalk on the far western tip of Rottnest. From there, it was up to the Cathedral Rocks to try to spot seals. 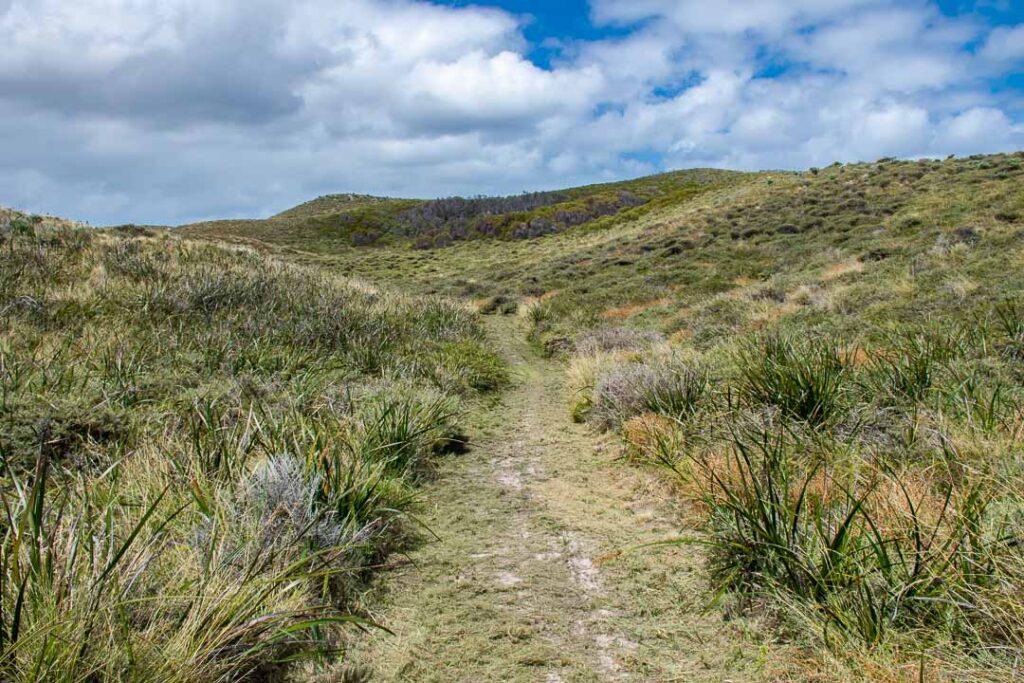 As nice as it was cycling the roads of the island, I really enjoyed walking the Wadjemup Bidi walking trail. The trails are a great way to venture inland a little and see the island’s scrubby terrain up close. That said, I was a little wary about snakes on the narrow paths. When the rain clouds started closing in though, I forgot all about that and rushed to get back to Thomson Bay. 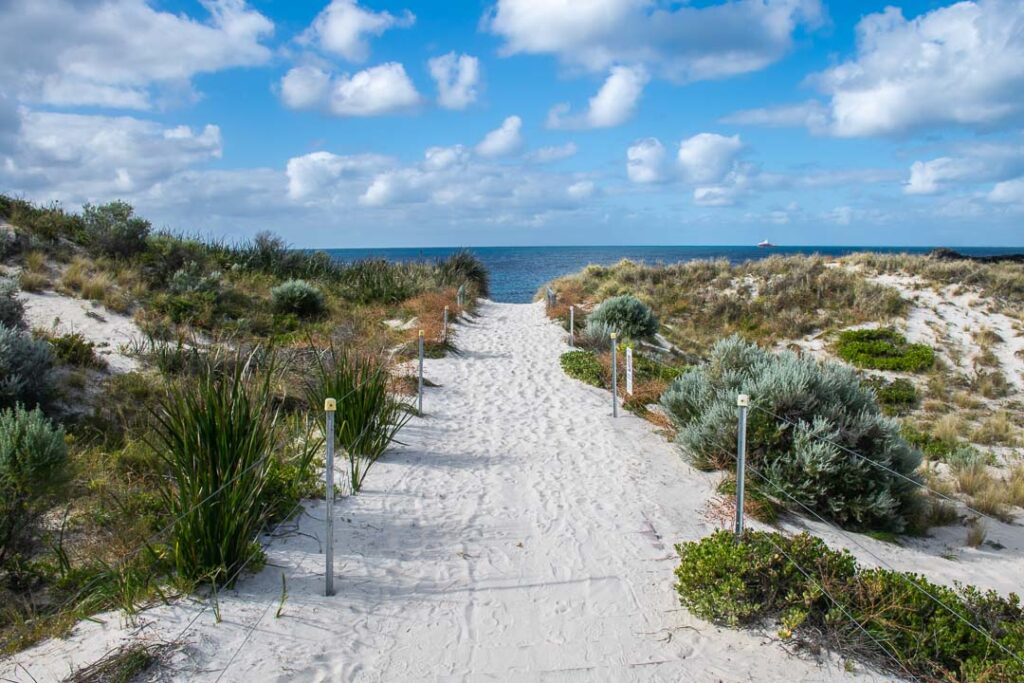 With a little free time left on my first day, I finish up by spending some time at Pinky Beach. Located just north of the island’s settlement, it’s one of the nicest beaches on Rottnest. Up one end of Pinky Beach you have Bathurst Lighthouse, one of two on the island.

Besides the soft sand and surrounding scenery, Pinky Beach is also a sheltered place to go for a swim. So, even though it was October and pretty chilly, I went for a dip. It was nice to go for an admittedly short swim after a day of cycling, but I think it’d be much nicer in summer. 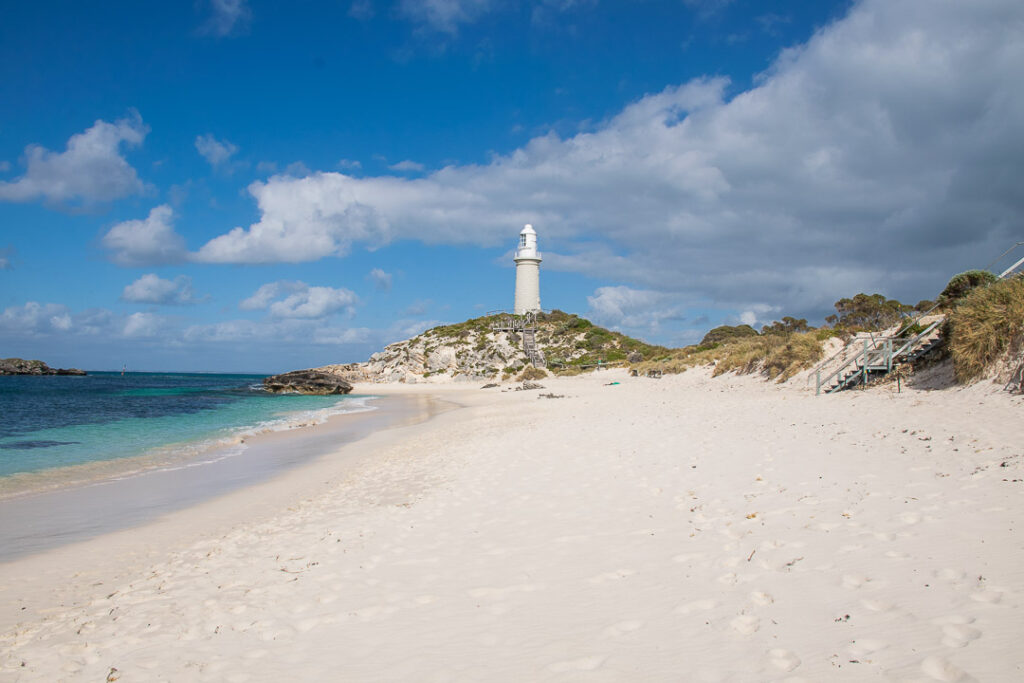 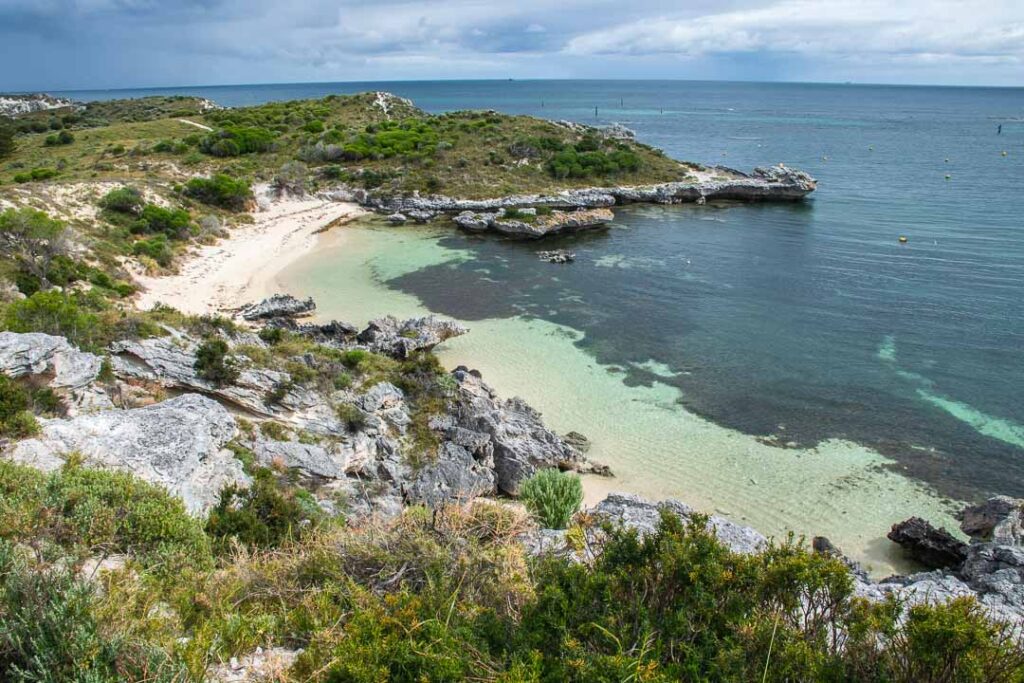 The benefit of staying longer on Rottnest Island was that I had time before the ferry the next day to further explore the island. This time I set out along the north coast to see its many bays and beaches before leaving.

Heading out from the settlement, you first pass Longreach Bay and Geordie Bay, home to most of the accommodation away from the main settlement. But these bays also have decent beaches and the coast gets more interesting past them. Little Parakeet Bay and Little Armstrong Bay both have really nice sheltered beaches and viewpoints above them. You can go right along to the Narrow Neck if you like, but I turned around at Stark Bay Beach. 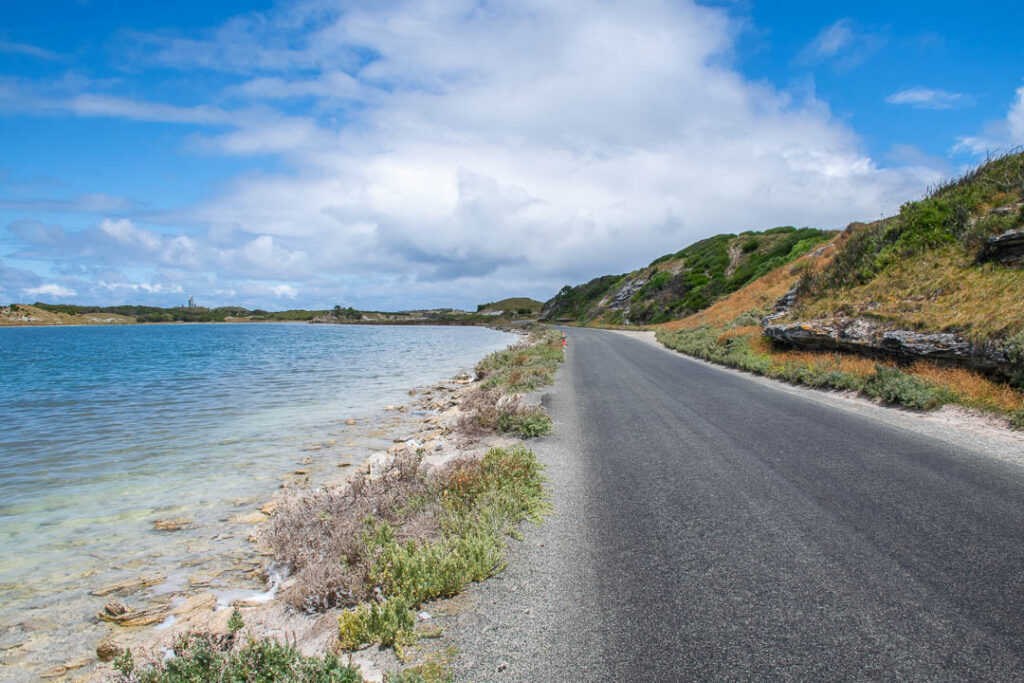 When coming back from the western end of the island, one way back is through the middle of the island. Go that way and you’ll pass between Rottnest’s lakes, a bunch of shallow salt lakes that add another dimension to its landscape. 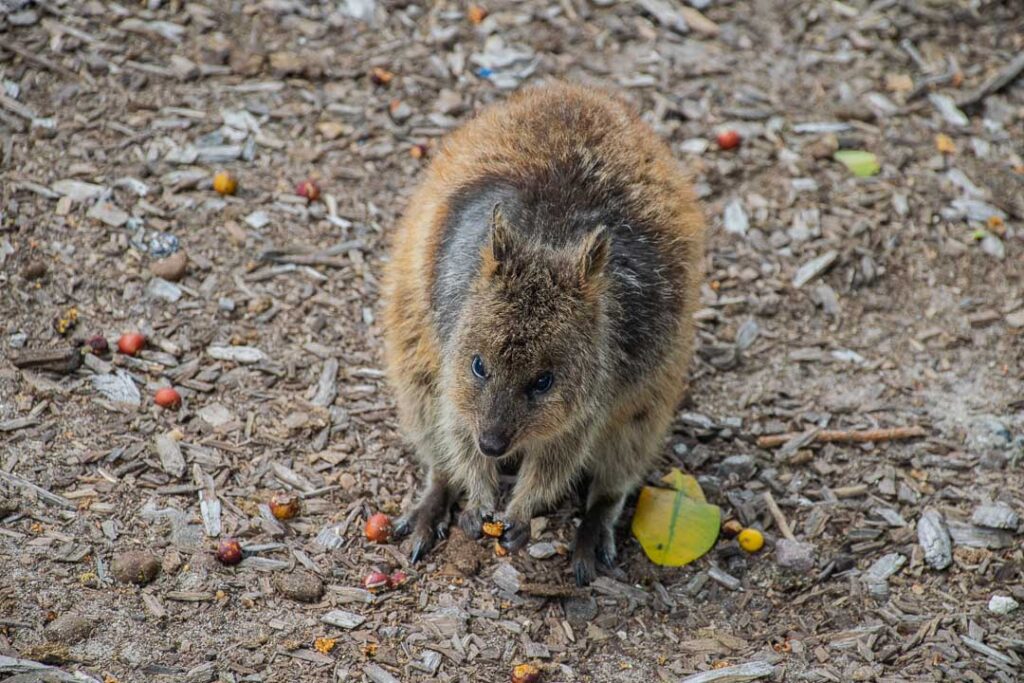 But really the most popular thing to see are the quokkas on Rottnest Island. These cute little marsupials are almost exclusively found on small islands in Western Australia, with Rottnest one of the easiest places to see them. Tourists love trying to get the popular smiling selfie.

Given that they’re wild animals, I expected it would be hard to find them on the island. Turns out, they’re everywhere around the Settlement because that’s where the food is.

And I don’t just mean the grass and scrub near the campground, but also at all the cafes and eateries. Some animals have clearly developed bad habits about scavenging for food and the special gates at venues doesn’t seem to keep them out. 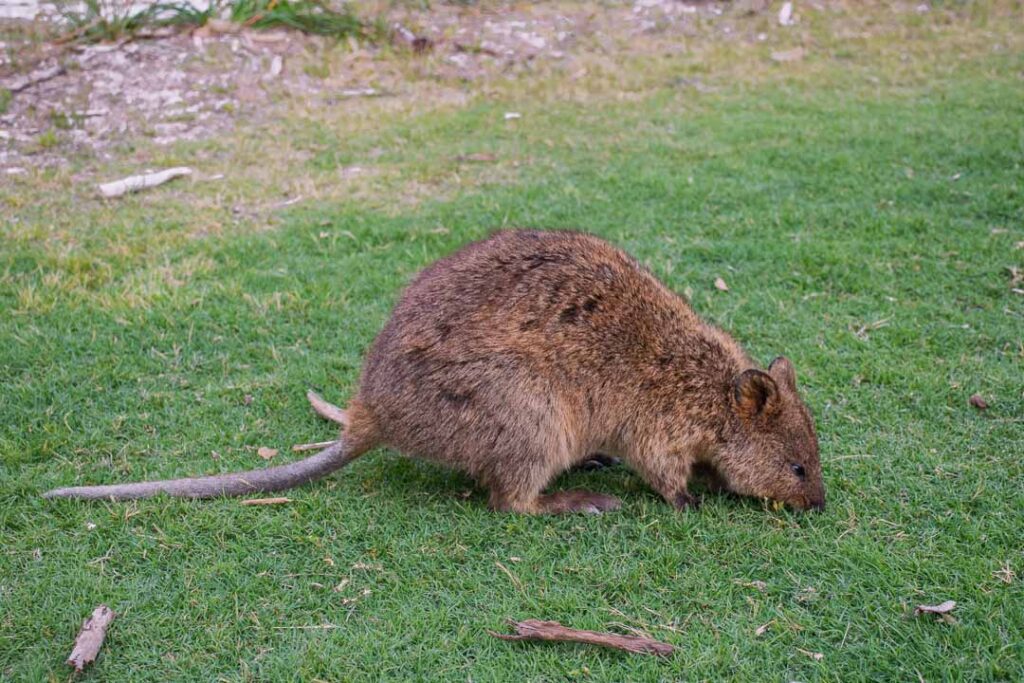 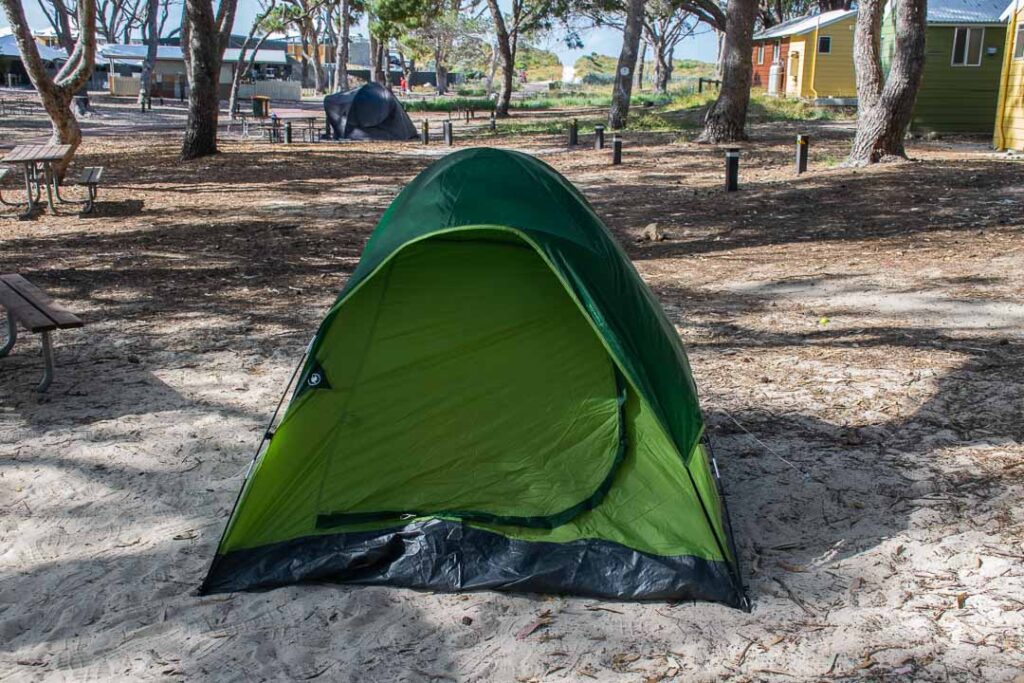 If you’re not doing a day trip to Rottnest Island, you’re going to need to think about where you want to stay. Accommodation on Rottnest covers pretty much every price range, from simple cabins to nice hotels. Most places to stay are centred around the Thomson Bay Settlement, meaning you don’t have to worry too much about location when you’re looking.

But a great way to add something different to your trip is to go camping during your trip. Now, there are two ways to go about Rottnest Island camping. One is to pack a tent and book a spot at the Rottnest island campground like I did. The site has the usual facilities you need like a shower block and BBQ.

But for something a little nicer, consider a stay at Discovery Rottnest Eco-Village, the Rottnest Island glamping option. The campground borders the eco-village and I could see that the setup there is really nice, with generous glamping tents and even a beach club where you can hang out.

As for the experience of camping on Rottnest, it was pretty fun. It’d been a long time since I’d last camped and this was actually the first time doing it solo. Setting the tent up as the wind picked up was harder than I would have expected. And even though it was a fairly cool evening and not the best sleep, it was fun to do something different.

One quirk for all visitors is that your luggage is handled by the ferry company. A few hours after you arrive they deliver your bags to where you’re staying, but more accurately, leave them on the street outside gate or at a collection point. It’s an unusual honour system, but it seems to work.

Tips for Visiting Rottnest from Perth 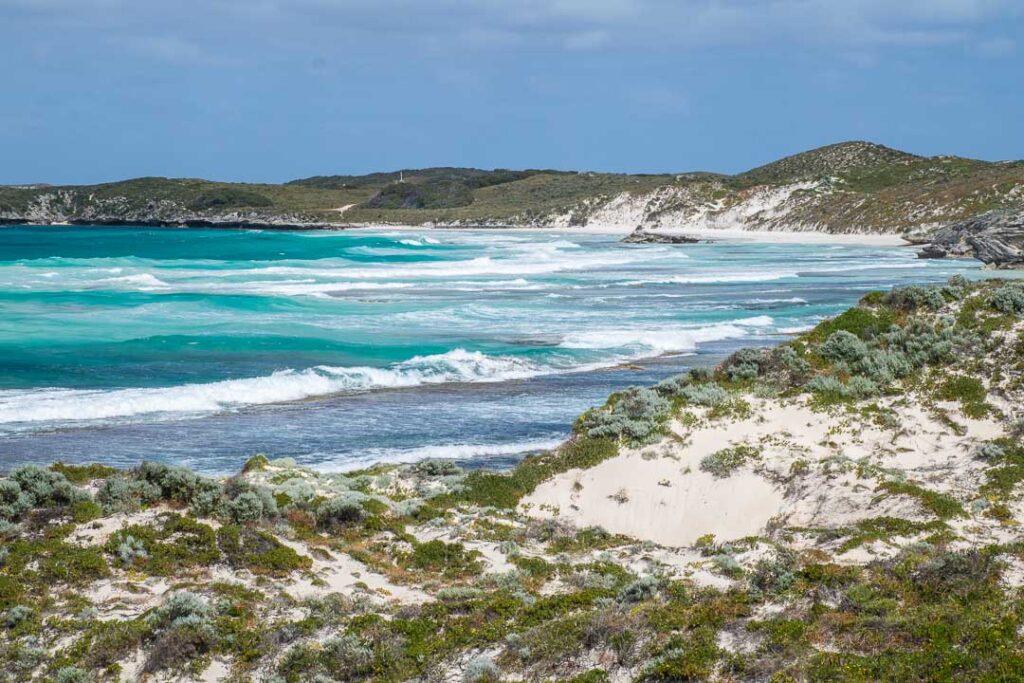 Since we’ve covered getting there, getting around, and where to stay, there’s not much more advice on visiting Rottnest that I can give. The tips I do have are actually a lot of the common ones you see for outdoor destinations.

Make sure to wear comfortable shoes and clothes, especially if you plan on walking or cycling. Pack sunscreen because there’s very little shade, but don’t discount it raining, even though it’s Western Australia.

Finally, bring snacks and food if you’re on a budget or plan on exploring a lot, because food on the island is a little overpriced and mostly only available at the main settlement.

Have you had the chance to visit Rottnest Island from Perth? What was your favourite thing about the island? Please share your thoughts in the comments below.